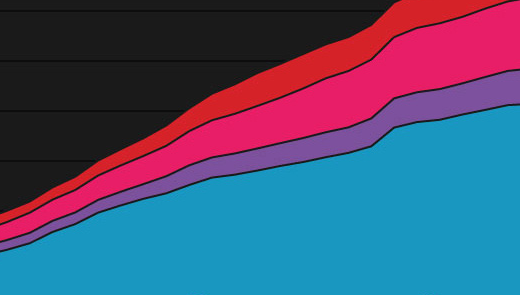 Infographics have quickly become the bane of the Web since exploding in popularity over the past year. The number of poor designs, empty stats, bias and sketchy sources are enough to make any design-conscious person cringe, but that’s because infographics aren’t any different from any other sort of design; there’s good and bad work out there, and the latter always outweighs the former. In other words, the average website isn’t going to be beautiful or useful, but that doesn’t mean the gems aren’t worth it.

This is exactly how I feel about infographics, and with that in mind, I’d like to draw your attention to Visual.ly. The data-driven startup continues to grow as a place for designers to come together over visualizations and infographics, and today the company is launching a completely “revamped” design, with social features that let users like, share and follow their favorite topics, users and designers.

Visual.ly’s redesign brings a much stronger community element into the site, which could help strengthen the startup’s existing user-base, while helping to highlight and promote the best work. So far content has been key, and now social is raising in importance for the site’s 32K designers and nearly 145K users.

Visual.ly is certainly in an interesting space, where its greatest value proposition is connecting talented designers with infographic-hungry companies that are looking to commission work. Of course, the discovery and promotional aspects of the site are important as well, but Visual.ly is definitely pushing brand connections.

Visually told TNW that this update “sets the stage for the future of Visual.ly’s platform – a place where all the players in the data visualization community can connect.” It’s starting to feel like a micro-Behance gone wild, focusing on just this infographic niche.

Check out the revamped site via the link below, and let us know what you think of it. While we’re at it, what do you think the future holds for infographics and data visualizations?

Read next: Legal warfare behind it, Google finally adds books to its Play store in France