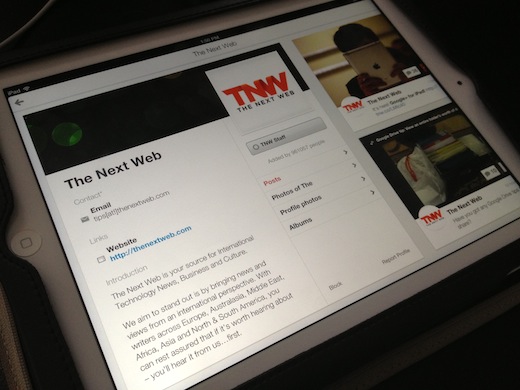 iPad owners who are fans of Google+ got some good news today, as Google released the universal binary for its iOS app, making an iPad version something better than just a Web interface or a x2 iPhone app. So we thought we’d go hands on with the new software to see what it has going on.

First off it’s worth noting that the tablet app isn’t exactly new. There’s been an Android version for a few weeks so this is really just a matter of bringing iOS into parity with that. Almost everything about the app runs exactly the same on iOS as it does on Android, save for the limitations of iOS devices not having back and menu buttons.

Firing up the app you’re first asked if you’d like to automatically upload your photos and videos as you take them. You can choose to do that only over WiFi, on both WiFi and cellular or you can just skip the option.

Once you’ve selected your photo and video option, you’re taken to your home feed of All Circles. A dropdown at the top lets you select what circles you want to read. A menu button on the side gives you options for Hangouts, your Profile and Find People, as well as Settings, though there’s no mention of the Events feature that was supposedly part of this release.

Overall the app is very nice. Browsing photos, especially, is a joy. But there are some caveats. It’s not nearly as responsive as you’d expect it to be, and in fact is quite laggy when browsing new circles or pressing the Manu button. Photo browsing, as I said, is great. But you’ll have to wait a few seconds for the first photo to load, presumably as the app pre-loads the entire gallery instead of just a single photo for a better flipping experience.

Here’s a quick demo video for you, but you’ll ultimately have to make up your own mind as to whether the app is worth using or not. It does bring some great features, and it’s nice to have an iPad app that is on par with the Android version, but that bar is set to a lower standard than we’d like to see.

Read next: Despite pressure, the FCC has declined to decide if it will reclassify the Internet as a telecom service