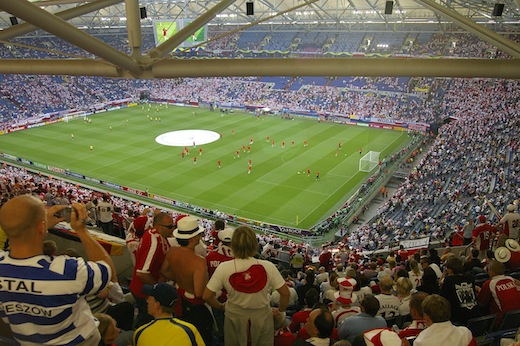 Germany to win? Torres to be top scorer? Greece to repeat their 2004 heroics?

With less than two days to go to the big Euro 2012 kickoff, football fans across Europe are arguing over how the next three weeks of drama will unfold. And what better way to spice things up than to make a bet?

That is certainly the belief of social betting startup Crowdpark, which has launched its new soccer game 90Live to coincide with the beginning of the European Championships in Poland and Ukraine.

The game offers users the chance to pick a country to ‘play for’ which they do by earning points through, for example, playing trivia games. There are also bets on upcoming matches, live bets and weekly predictions.

In addition, you can bet on various elements of specific ties – how many goals will be scored, if there will be a red card, which team will receive more yellow cards, who will score first, and so on.

Crowdpark mixes the worlds of legal betting and social gaming and 90Live is no different. Fans compete using virtual money, joining with each other to try and send their country to the top of the standings. Through Facebook, the social element allows users to invite their friends to join in.

There are also links between the virtual game and the real-life sport with 90Live offering the chance to win prizes including a PlayStation 3 with a copy of FIFA 12 and Samsung smartphones.

The soccer gambling space is no doubt an attractive one: according to H2 Gambling Capital, online betting was worth $13.5 billion in 2011, while football fans are fervent, loyal and keen to argue with each other over the smallest of things. 90Live hopes to make use of this by engaging a “new generation of soccer bettors on Facebook in a way that matches their lifestyle.”

All well and good – but there are already well-established methods of tapping into football fans’ desire to compete against each other, most notably fantasy football games which have been hugely popular in countries such as Germany and the UK for well over a decade. 90Live may face a tough battle in trumping that.

But Crowdpark has certainly picked the right moment to launch a game which is intended to be around long after the 16-team Euro 2012 comes to a close in Kiev on July 1.

It’s no secret that the massive popularity of major soccer tournaments is a tempting target for bandwagon-jumping – but it’s also the perfect time to focus attention on a related launch. As long as Live90 builds up a reputation as more than just The Euro 2012 game. But the idea is sound, and the user experience is a pleasant one.

Crowdpark CEO and co-founder Martin Frindt said he was excited to be ‘pioneering real-time soccer betting on Facebook’:

“We scheduled to launch 90Live at the height of this year’s football excitement with a special Euro 2012 mode. Our game, though, is perennial and we will feature betting for all the important leagues.

Live in-play sports betting is an exciting market as you can see from the market numbers… and gambling operators are excited by virtual-payout social games, so we’re confident that there is an ongoing market for social betting.”

Those numbers include the fact that gross revenues in the real money online sports betting market grew 5 percent in 2011, a year in which there was no World Cup or European Championships.

And Crowdpark, whose other products include AnteUp, will be looking at the success enjoyed by fellow Berlin-based startup motain in exploiting the massive digital potential of football.

If you believe, then, that England will scrape their way out of the group stages with a series of turgid draws before inevitably succumbing to a thrilling Germany performance, before Jogi Löw’s side go down 1-0 to a relentless Spain, 90Live could well be the place to put your (virtual) money where your mouth is.