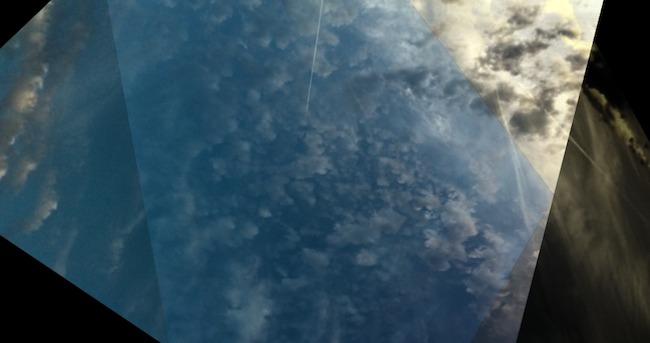 Stilla is an iPhone/iPad app by Maybe It’s The Lighting that feels like an entirely new way to capture moments — going far beyond the traditional photo. With Stilla you take not one, but 2 or 3 pictures that intersect in an overlaid 3D space, and the result is something magical, thanks to the gyroscopic camera.

We first covered Stilla back in December, and now the team is back with Stilla 1.5 and the ability to embed 3D WebGL images. To be honest, I haven’t been this excited about a photography app since I started using Instagram.

To get an idea of what I’m talking about, open all these links into a new tab, and start clicking, dragging and scrolling. We talked with Patrick Juchli of Maybe It’s The Lighting to learn more:

H: How has Stilla evolved since it was first released?

P: Stilla was released in late December 2011. This is the first update and it’s focused on sharing interactive Stillas with everyone by simply using a browser.

P: First, you actively choose to share a Stilla. None of your photos are uploaded automatically behind your back. If you do so, your Stilla will be uploaded to a server and will become accessible through a short link.

This link can then be shared through Twitter, Facebook or E-Mail, much like other photo apps do. Unlike most other photo apps, your uploaded Stillas will be treated as private by default. They won’t be shown as part of a public feed for example.

H: What does Stilla offer that other apps can’t?

P: Stilla hits a sweet spot between a photograph and a movie. A single photo is an abstract thing. It’s taken out of context, time has been frozen, things seem much more powerful or catchy as they actually have been. Reality looks different on a photo. You can observe that easily when taking a movie of the same moment: The same scene will seem much more complex and fragile.

It’s a lot harder to stage something in a movie (without music) than on a photo. But watching a movie is more passive than holding a simple photograph in your hand. Watching a single photo involves your own imagination much more. You may be drifting off while remembering a scene, imagining something else or simply take as much time as you like. Stilla keeps this strength of photography but offers additional facets, views to a single moment.

The interaction while viewing a Stilla is key. Today, we’re looking at photos mostly on screens. There, they look basically the same like old printed photos except that they’re missing the interactivity or say the haptic quality of a printed photo. Most of these screens could offer interactivity, be it through touch or through a mouse. But this stays unused, interactivity is for navigating, selecting, organizing – none of those has an emotional quality of any kind. Instead of taking the interactive medium seriously, most Apps resort to polaroid frames and film filters.

Stilla offers a fresh perspective on what it means “to hold something in your hand,” or “to touch a moment” without imitating old media or just simulating a photo to be rotated in space. Stilla creates a magical quality, it actively supports the gaps between the single facets with a beautiful, special blending based on how light is distributed in the photos. And light is what photography was always about. Stilla invites you to rediscover this in a whole new context.

Stilla offers a quick, versatile and creative way to capture a moment in 3D. A Stilla can be made out of only 2 pictures or as many as you like. You can choose to capture spatial details – coherent or not – or create something like a zoetrope to build a story. Take a picture of a friend and add a second one of something that reminds you of the place you were. In a group of people, hand your iPhone around and everybody adds a facet looking from their viewpoint. Combine abstract shots of light and color. There are so many ways to play with this camera while the basic concept is easy to understand. It’s not a clever technical black-box, it’s hands-on.

Stilla is an App designed to keep your own moments with you. It’s a modern interpretation of the photos in your wallet. Everything has been developed and designed with a lot of attention to detail for a specific reason. Everything revolves quite literally around your pictures. Your photos, your world, your friends are always in the center of the app and there are          almost no graphical UI elements. Moving around the App feels light, snappy and focused without losing that magical quality.

When did you look at a photo for longer than 5 seconds the last time? Stilla is designed to enjoy your pictures. For those special moments you want to remember.

Of course, WebGL is a developing technology and only functions in the latest of browsers. In other words, you’ll need to keep an open mind. What’s special about this, though, is that the team is actually trying to break the mold.

The world doesn’t need another group photo sharing app. Exploring new ways to capture a moment and playing with the space between photos and video, on the other hand, feels much more compelling.

Read next: Airbnb partners with Lloyd's of London for the new million dollar Host Guarantee