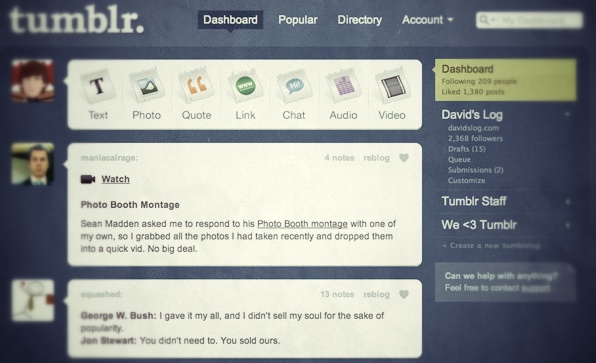 Back in early February, word got out that Tumblr had hired an editorial team to surface noteworthy content from the network. Now, Tumblr has announced the results of this initiative, which takes the form of Storyboard, a hub for in-depth conversations with Tumblr’s creative community.

We had known that Tumblr’s editorial team would consist of editor-in-chief Chris Mohney and executive editor Jessica Bennett of The Daily Beast. Though the final outcome isn’t surprising, I was expecting something a bit more tech-driven instead of a blog managed entirely by hand.

If you’re a Tumblr user and want to share a story with the Storyboard team, all you need to do is tag a post with #storyboard. According to the announcement, Tumblr’s editors will “monitor the tag and the community’s interactions there, promoting stories that resonate.” If the team finds that “your story really works, [they’ll] ask to expand it for publication on Storyboard itself.”

Tumblr’s editor in chief, Chris Mohney, says he sees Storyboard as a venue to “shed light on content and creators that otherwise might not get discovered, to surface stories and bring them to an audience that is always hungry for new ideas.” Executive editor Jessica Bennett states: “If you think think of Tumblr as a city of 50 million, we’re drawing out the narratives, the ideas, the social trends and themes that affect the people who live in it.” 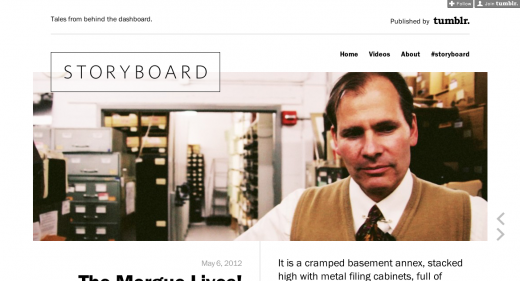 We’re excited to announce the official launch of Storyboard, our new hub for in-depth conversations with Tumblr’s creative community. We’ll be posting regular features on creators working in and around Tumblr’s massively diverse cosmos — writers, musicians, animators, scientists, artists, archivists, chefs, comedians, or anyone else with a great story to tell. Today we’re talking about Michael Stipe, the New York Times, Afghanistan, and the design mechanics of the Tumblr Dashboard.

We want to hear your stories too. If you’re interested in submitting a story (or even a story idea) for us to publish, just post it on Tumblr tagged with #storyboard. Our editors will monitor the tag and the community’s interactions there, promoting stories that resonate. And if your story really works, we’ll ask to expand it for publication on Storyboard itself.

Last but not least, if you find yourself in New York City on May 10, we’d love to hang out at the official Tumblr meetup celebrating Storyboard’s launch. It’s at Powerhouse Arena, 7-9pm, with drinks on us and several Tumblr celebrity mystery guests (cough Topherchris, Tommypom, cough). 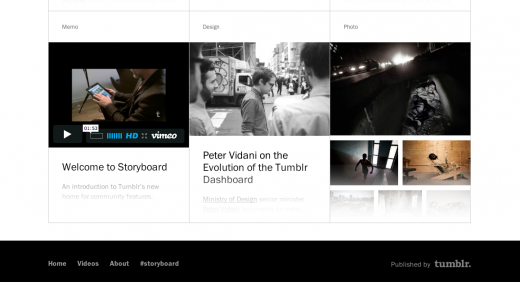 This is certainly an interesting project, but it likely won’t help to resolve the need for improved discovery tools within the blogging network itself. So far, surfacing new content isn’t Tumblr’s bread and butter and Storyboard won’t change that.