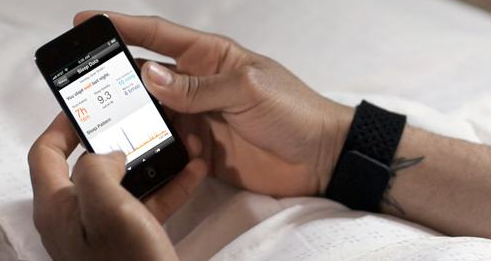 The Lark, which began its life as a ‘silent un-alarm’ clock armband that wakes you with gentle vibrations, has been expanded to become a full-on sleep coaching system. The new Lark ships with a free comprehensive sleep analysis using data gathered by the band itself and feedback that doesn’t just tell you you’re not sleeping well, it tells you why.

If you’re unfamiliar with the device, it consists of an armband with a small USB enabled wafer attached. The device will slowly vibrate you awake at your time of choosing, but it also contains sensors that will detect when you awake in the night to toss and turn before falling back to sleep.

We covered the Lark back in April of last year and found it to be an interesting concept with clean iPhone integration. Apple agreed with us and began selling the devices in its stores worldwide.

Now, Lark is using the measurements provided by the device to help you figure out why exactly it is that you’re not getting the right kind of sleep. The biggest addition is a free 7-day sleep assessment that is built out of analysis from a collection of sleep experts. You wear the device, transmit a weeks worth of data to Lark and they compile a recommendation and report that tells you how to take action to correct your patterns.

The apps have also been tuned up to give feedback on your patterns, with recommended actions and a daily rating of your sleep habits, including how restless your sleep is. There are also a set of badges that reward good habits.

One of the coolest additions is the ability to enter the types of activities, like eating, watching TV or browsing the internet, that you’re engaged in before bed. This will allow you to track which of these hurt or help your sleeping. This should help you to tune what you’re doing to eliminate issues.

Lark is in many ways a simplification of the field of sleep study. There are many things that a full-featured sleep clinic can tell you that the simple monitoring of the Lark cannot. But for many of us a clinic isn’t the answer as our patterns aren’t broken enough to warrant a stay at one.

With the addition of the new 7 day assessment document, the habit tracking and the feedback, the Lark looks to be a good bet for those interested in tuning up their sleep habits. Even if you just want to get a handle on how you feel when you wake up and why you do so, the $99 pricing for the basic Lark seems like a bargain.

Read next: Yuri Milner's strategy: 'stick with the founders as long as they're pushing the envelope'