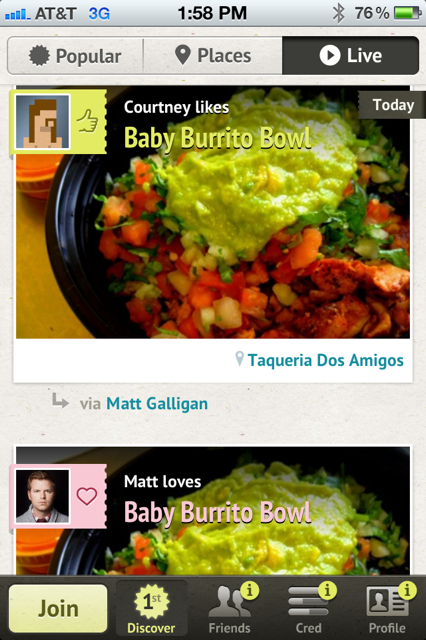 Digg founder Kevin Rose has a new venture, Milk Inc., and it has released its first app, called Oink. The app is described as a ‘way to rate and rank the things around you,’ and bills itself as a ratings engine not just for places, but the things inside.

When you fire up the app currently you’ll get the ability to connect a Twitter or Facebook account or use an email to sign up, but the app is still in a limited beta so you’ll need to wait in line to actually begin to ‘Oink’ things.

You can begin browsing things that have already been rated around you by the beta testers of the app.

You can view items in categories or on the whole. Unsurprisingly a lot of what you see are individual food items so far, although Oink eventually wants to rank everything from car rental locations down to the best car to rent at that location.

Instead of just ranking Six Flags as the best theme park, you can rate the coasters in that park from top to bottom.

The app allows you to build cred by giving things ratings and then having those ratings approved by followers and other users of Oink.

The concept of rating ‘everything everywhere’ may seem a bit silly at first, but if it catches on there is some serious potential here to build an enormous database of objects with real data attached to them. Now it’s just a matter of seeing if enough users adopt the service to make it a truly helpful resource.


What do you think, are you eager to start rating anything and everything, or do we spend too much time cataloguing people, places and things already?

You can download Oink Builder on the App Store now for free.

Read next: These 12 Brazilian startups will compete for a trip to Silicon Valley