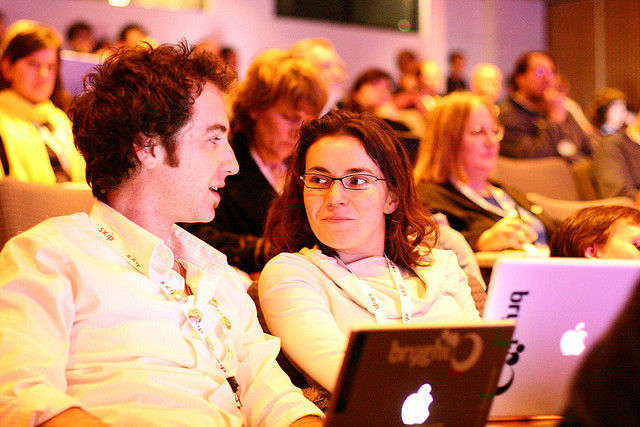 There are many pain points in the conference business, the least of which is a faulty wifi connection. And if you’re not there, you miss out on all of the valuable presentations, the product demonstrations and the unique moments created by the conference organizer. Once it’s gone, it’s as though the event vanished completely.

Conferize, which officially launced at DEMO this week, is the product of Martin Ferro-Thompsen a Danish entrepreneur who is also behind Issuu, a gorgeous publishing platform that turns content into Web or tablet magazines. Conferize is going after a market that is larger than automobile sales worldwide, with 100,000 conferences being held in the U.S. alone each year.

Conferize makes it easy to track who has attended a conference, along with the social media chatter, and best of all, the information is stored, so that people can go back days, weeks, or months after the event and see what the audience thought about the event.

On the first full day of DEMO, a woman came up to me and asked if I had a cable for the IBM Thinkpad. Not an unusual request. I didn’t have one but I’m sure that at least a few people at the conference would be able to help her charge her laptop, if only they knew that she was in need. Similarly, I posted an advertisement on Craigslist, offering seats in the car I was driving. I even sweetened the deal, saying that the passenger could pitch me his or her startup for the entire duration, as there was nowhere to escape. Perhaps I was too early in posting, because I didn’t get any response.

With Conferize, I could easily imagine a communications backchannel layered on top of an event, for people attending a conference, or those who are interested to learn more. If people were to opt in to receive messages from the organizer on their phones, I could have offered a ride back to the city, and described myself so I would be easy to find. The imagination really races when thinking about what could be done.

Currently Conferize uses the best of man and machine to gather information about the nearly 1 million conferences that happen each year. All that is needed is the name of the conference, a website, and a Twitter hashtag if there is one, and an event page is set up. While Conferize uses the Twitter API to bundle any tweet mentions, building out the page description is handled by Amazon’s Mechanical Turk, so someone, somewhere in manually inputting the data, to ensure quality results.

There’s a lot of value that Conferize creates, even when the conference is full of super techie people, like DEM . Ferro-Thompsen was himself on an academic track, pursuing a PhD, and he says that the tool can be helpful in conference discovery, as well as sharing the knowledge and information from the event. By signing up the the service, you’ll be able to see what events are taking place in your industry which might be of interest, even if you were previously unaware.

And this gets us finally to the business workings of Conferize. Once critical mass has been reached, Conferize can serve as the central reference point for people to book their flights, hotels and other conference-related accommodations. While Cvent has a variety of tools for tracking conference attendees, none does as much with social media data, or does so in a way that seems effortlessly brilliant. While Conferize plans to charge event organizers based on the sophistication of the package they want for their conference, simply referring people interested in a conference to travel booking sites, and collecting affiliate payments could be a gold mine.

This past June Hermione Way caught up with Ferro-Thompsen at I/O Ventures in San Francisco, and you can see that interview here.

Read next: This was the most useless startup at Disrupt [Video]