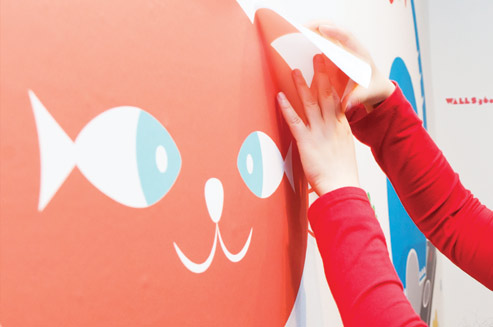 Sydney-based digital artist Yiying Lu has unveiled her latest creation that uses augmented reality (AR) to uncover an underworld of interactivity on walls.

Lu is Co-Founder & Creative Director of Walls 360, a company that creates on-demand custom wall graphics of Lu’s digital designs. People can order the artwork online and stick them on their walls at home or in the office.

Working with buildAR, the AR content creation platform, and the recently launched Layar Vision application, Lu is striving to make interactive art available everywhere. By pointing your smartphone or tablet at their wall art, users can unearth new messages and peel away layers to expose new content that can be updated at any time.

Lu recently created a collection of fashion illustrations, but rather than producing standard sketches, she integrated QR codes into the designs. Each illustration featured a QR code that,when scanned with a reader, lead the user to a website to download free digital versions of the artwork. Lu says:

“When I released my QR collection recently I hinted at what my next step would be. Now I’ve taken a leap into exploring this new interactive underworld. We have breathed life into our WALLS 360 wall art and turned them into a launch point for messages, videos, games and more.  I’m so excited by the creative ideas this has opened up for us and you will be seeing a lot more of them soon.”

The artwork will come with pre-defined AR content, but users will also be able to add their own content, meaning it could be good for quirky gifts that are personalized for the recipient. There will be a Web-based interface for adding these messages and content. Only some pieces will be AR enabled, and this will be clearly represented on the site.

Unlike QR codes, which are evident by their appearance, interactive art may be more of a challenge for users to find as it won’t be instantly obvious that they have hidden content embedded. “That’s one of the challenges with Natural Feature Tracking”, says Rob Manson, Co-Founder of buildAR. “QR codes and Fiducial Markers are a little ugly but at least it’s clear to the user that they can be scanned. Now that we can make almost any image an AR marker it’s a more challenging communication issue.”

If you’re not up for the challenge, they have also created a robot QR code. When you receive your wall art, this will include a smaller QR code sticker that you can choose to place  on the wall so people know the wall art is interactive.

You can find out more about the new interactive AR art by visiting: http://app.walls360.com.

The default AR content that the pieces will have includes a game called ‘Fishy Kitty’, but more will be rolled out over time. These games use vision-based recognition to launch the game and then location-based AR to spread the markers (e.g. the gold fish bowls in the game) around you.

“We love working with Yiying and the beautiful artwork she creates. Together we’ve created a whole new retail model for augmented reality by enabling people to attach their own hidden messages, 3d objects and other content to the amazing WALLS 360 wall art.  Now, putting one of these artworks on your wall is just thebeginning.  They create a digital doorway through which new and exciting creations will leaping out at you”.

The public release of the Layar Vision enabled browser is in October, so until then the good people behind this initiative can only demonstrate what they have developed as per the video above.

Meanwhile, if you want to read more about augmented reality, check out: Augmented Reality: Past, Present and Future.