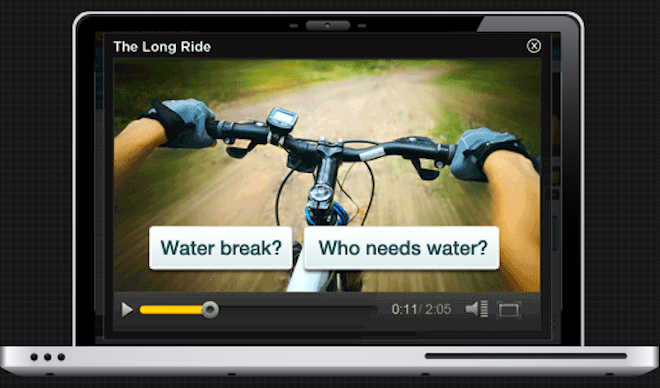 Video on the Internet has held a lot of promises and with those promises it has been given a lot of responsibility. I’ve heard it said more than once that the integration of video is what will be the defining difference between the Web 2.0 world that we’re in now and the live-action, self-directed Web 3.0 world that we’re entering.

Unfortunately, up to this point, video has been like hitting a brick wall on an otherwise open road. Once you’ve reached the video, the only thing that you could do was watch it. That is, until the birth of FlixMaster.

FlixMaster is the brain child of CEO Cameron McCaddon and COO Erika Trautman. Trautman comes from a lineage of video production, working in California, while McCaddon worked in video game design. Combining the ideas of the two realms the two “started wondering why videos on the Web were still kinda lame. They were single, linear, non-interactive experiences.”

“We had a dream to make videos as rich and interactive as everything else on the Web.”

It’s with that in mind that FlixMaster came to life. The company has created a drag and drop online video production system that allows any user to create HTML5-powered video that you can interact with via any modern browser, mobile included. But it’s more than just video, according to the founders:

“We build technology that makes it possible to link videos to other videos, text, images and forms, so they can be as interactive as the rest of the web.”

Until this point, technology of this caliber was only available via extremely high-end studios that can charge literally hundreds of thousands of dollars in order to create it. Unfortunately, those videos are often linked to a single player in which they’ll work so they’re limited in their scope of use.

There has been, for some time, a workaround being used in the YouTube annotations editor that would allow you to link to other videos, somewhat like a “choose your own adventure” story. However, the annotations system was never really designed for this, so it didn’t hold the potential that FlixMaster has.

The goal, according to the founders, is to fundamentally change the way that people think about and use video on the Web. In the near term, you’ll start seeing videos with FlixMaster functionality popping up on YouTube, Brightcove and other “famous players”. Since FlixMaster can work with any of these, it isn’t limited in how it can be hosted and shared.

Of course, with all of these clicks happening, there’s a wealth of data that’s being collected and that’s a very good thing. “We can track really detailed information about who is making which choices,” says McCaddon. “The people who create the experiences can get great feedback like heat maps and branched funnel maps” which would allow the creators of the videos to then tailor their product more specifically.

FlixMaster is not without its difficulties. As it stands, there’s a dedicated base of millions who are addicted to quickly uploading videos on YouTube. It’s going to be difficult to get these people to use products other than what they’re used to. Though it’s worth noting that they can use FlixMaster to create their interactive videos, then upload the fully-functional project to YouTube so that they’re not leaving an audience behind.

Seeing what a FlixMaster creation can do should be enough to start the shift. Eventually, as the products gets into the hands of more users, we should start seeing more content creators choosing to use FlixMaster in order to create the richer experiences that audiences will start to demand.

The FlixMaster team is working on perfecting their pitch for the Boulder edition of TechStars Demo Day on the 4th of August. Coincidentally, that’s why there’s not a demo video to show you just yet, but we’ll have one soon. After Demo Day is done, then it’s back to work on the product. In the not-so-distant future FlixMaster will allow its users to stitch together video from different sources, creating new productions from previously-hosted ones. That video can then be streamed directly to the player, allowing lower hosting costs and widened interaction with a minimum of work from the creator.

The model to make FlixMaster profitable is strong, with a tiered subscription service driving revenue. However, it should be noted that the team is determined to make the product accessible to all users, no matter what their size.

In delivering on the age-old promise of what online video really could be, FlixMaster is setting the bar high for the competition. It will be interesting to see what people do with the service, and we should start finding out soon. The company is in a closed beta right now, but if you want to start working with the FlixMaster application, just head over to the website to sign up. The team will be sorting through applications by hand and approving those users who could benefit most from it.