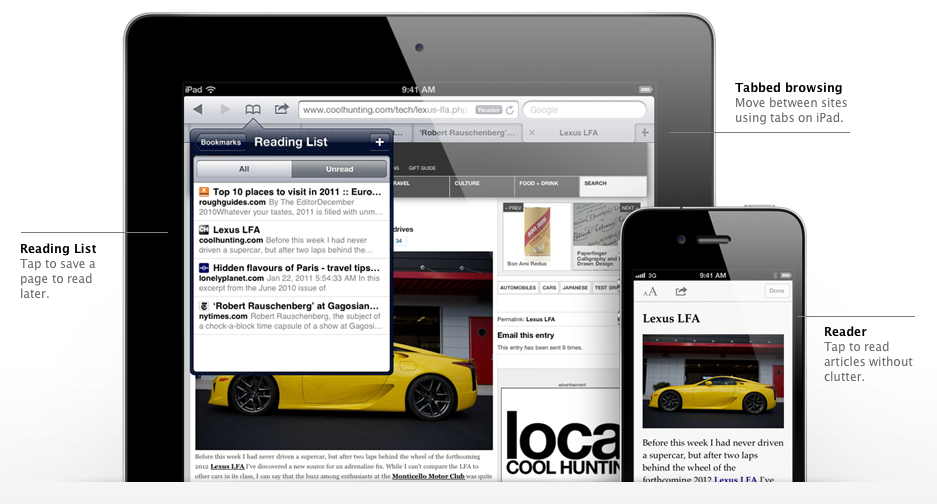 During Apple’s WWDC Keynote speech it was announced that the Reading List feature of OS X, a ‘read it later’ function that allows readers to tag articles for later consumption in a simplified format, was going to be ported to iOS 5 and cross-synced on all of Apple’s hardware devices.

This news instantly made many of us in the Apple world think of the way it would effect the future of the excellent Instapaper, an app that offers a very similar core featureset. It was such a hot topic that developer Marco Arment was contacted by concerned Instapaper users, followers on Twitter and large tech blogs almost immediately as the news got out about Reading Lists cross-platform aims.

In a post today on his blog, Arment was very positive about the future of Instapaper, as he has been since the first hints of Reading List started popping up. He’s confident that the future of Instapaper is secure for a couple of reasons, not the least of which is the halo effect of having the entire breadth of iOs users potentially exposed to the concept of a ‘read it later’ product.

If Reading List gets widely adopted and millions of people start saving pages for later reading, a portion of those people will be interested in upgrading to a dedicated, deluxe app and service to serve their needs better. And they’ll quickly find Instapaper in the App Store.

Another reason not to be concerned about the future of Instapaper as an app or a sharing platform, its tight integration with iOS apps, was pointed out by Hypercritical’s John Siracusa. There are dozens of apps on the App Store that have built-in integration with Instapaper already. It’s such a go-to feature for me that, like John, I get irritated if it’s not there. That integration means that Instapaper has a long way to go before Reading List, which is limited to Apple’s apps like Safari, replaces its experience.

There may be a point at which Apple opens up the service for any app to use to push content out to Reading List but that time isn’t here yet. If even a small percentage of users like what Reading List does but want a more premium experience with more features and a curated suggested reading list then Instapaper actually stands to gain quite a few sales and most likely more loyal customers.

Instapaper does not need Apple’s millions of customers to be successful. At the moment about 1% of iOS users have Instapaper installed. If that figure moves to only 2% the growth for the product would be insane for a small developer like Arment.

Reading List, like Instapaper, isn’t for everyone. Mainly it’s for users who want to read long-form articles and content that they may not be able to finish in one sitting. But, if you haven’t tried Instapaper yet but are intrigued by the Reading List concept, then you could do worse than the $4.99 purchase price to see what Reading List may be some day, when it grows up.

Read next: Apple stopped innovating with the iPhone. You're welcome.