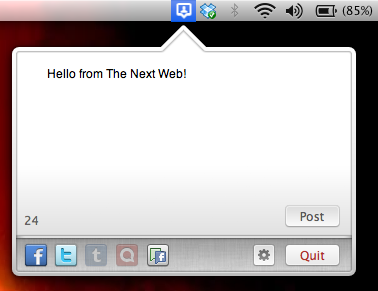 It’s not quite your usual full-fledged social network management all-in-one app. Instead, it offers a quick, easy, non-distracting alternative for posting updates on different social networks using a simple app that rests on the Mac menu bar.

There’s nothing much to configure with this app aside from adding and removing services you want to post to, and choosing among a couple of  link shortening options, including the option of entering a custom URL shortening service.

The biggest downside for the app is that it doesn’t let users upload media files. Also, what could work better is if there was a way to trigger the popup window via keyboard shortcuts.

Like most third-party social networking apps, UpdateBar doesn’t show a preview of the link when posting to Facebook.

It offers very limited functions, which is justified by its cheap price. You can grab it in the Mac App Store for $0.99.

Read next: AOL shuts down AOL.in