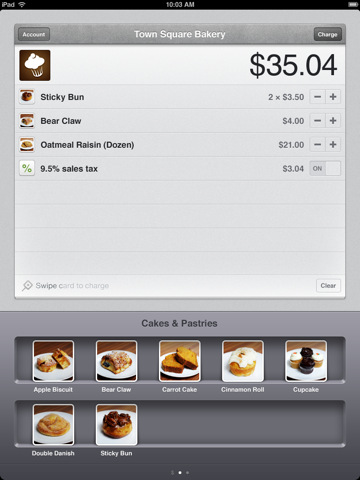 Square CEO Jack Dorsey will most likely be announcing something interesting about the payment system for mobile devices 10 a.m. PST on Monday at Techcrunch Disrupt. Whatever that announcement is it will no doubt include the news that the Square payment app has been updated to version 2.0. Update: Square just announced the Square Register for iPad and Square Card Case for iPhone.

The iPad update to Square [App Store, free] brings the addition of shelves to place your items on for easy organization and more options to control item variety. Descriptors such as small or chocolate can now be added to items to create various varieties of an item, which is good for businesses who sell many versions of a single product. The iPhone version has also gotten a nice facelift, improving on the look and feel of the app a bit.

These updates may or may not figure in to the announcement later today but improvements to the iPad interface are welcome as it was previously not much more than a scaled-up version of the iPhone UI. This gets us that much more excited about the possibilities that Square’s announcement will have something to do with Apple.

The Square payment app uses a small Square payment device to take credit card payments on mobile devices like the iPhone, iPad and Android phones. At the moment the Android version of the Square app does not seem to have received the same updates.

Read next: Ballmer: 'Mango' update for Windows Phone 7 to contain over 500 new features