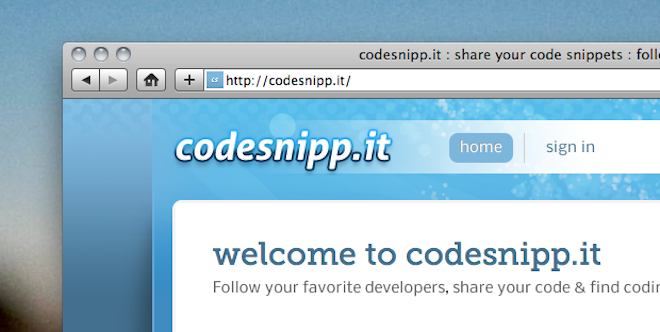 Sometimes a great idea is enough. Other times, a great idea takes a lot of time, effort and heartache before it becomes a reality. The latter is the story behind Codesnipp.it, a social sharing site for developers. Nashville-based Amber Weinberg and her team had put the site together almost a year ago. It had received initial attention and then…nothing. According to Weinberg:

I thought for sure this site would kick off quick and be a go-to resource for developers, but it wasn’t. We weren’t making enough money to dedicate extra time to the project, and neither of the programmers wanted to continue working on the project.

So what’s a dev to do? If you’re Weinberg, you don’t scrap the app, you fire up the phoenix. She did re-work the site from its original version, trading time with a favorite developer and managed to work out a deal with one of Codesnipp.it’s best contributors to get the infrastructure rolling the way that she wanted to.

The results? Really impressive. Weinberg states that the user invitation system has been trashed, in favor o of an open-signup site. Because it’s a site that relies almost entirely on having user content, the signup process had to be simple. That’s handled by allowing new users to sign up via Twitter or Facebook.

So what has come out of the rebirth of Codesnipp.it? Honestly, it should be a great alternative to sites such as github. Instead of collaborative sharing like github, Codesnipp.it serves as more of a single-handed repository. You can keep snippets of code on the site for personal use, or share them with others. You can search through and find things that you’re looking for, as well.

Of course, any site with user-generated content will need users in order to succeed. That’s part of the reason why we’re adding it here to TNW Apps. We want to help Weinberg get the word out that the site has seen a complete overhaul and we think that it will be of great use to many of you as well.

Give it a shot and let us know what you think.

Read next: Canadian Regulators update guidelines to include "liking" and "re-tweeting"