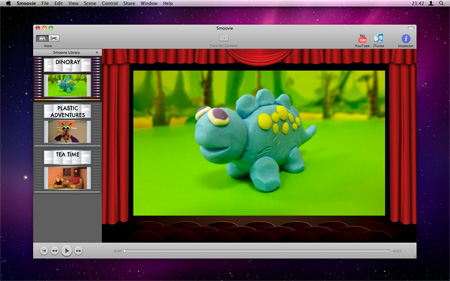 Open Planet Software, the Scottish development company that specializes in Mac OS X and iOS software, has developed an app capable of assisting you in publishing stop-motion movies directly to YouTube.

Smoovie, is stop-motion editing software that creates brilliant videos from a group of still images. If you’ve never heard the term stop-motion, it refers to a technique we’ve seen in movies like Star Wars. Remember the At-At walkers in Empire Strikes Back? Gumby and Robot Chicken come to mind as well. That’s stop-motion. We’ve also included a few examples at the end of the post.

To get started creating a movie, Smoovie gives users two possible choices; import a group of photos or use the Mac’s i-Sight camera to capture images on the fly. Choosing to import images from a digital camera can be done by simply dragging the images into the editor or by accessing iPhoto or Aperture libraries.

We’ll explain how to use the live camera but first we’d like to touch on how images are turned into movies, it’ll give you a better idea of how it all works. Let’s say we’re making a movie with action figures using a make-shift tiny set. To begin the process, the action figure should be placed in point A. As an example, if we wanted to make the action figure fly, the first image you’d take would be the toy on the ground maybe extending its arms ready to take flight. Every picture you take thereafter would be a gradual string of images until the figure reaches point B where it’d be in full flight.

The live cam can be used with iSight as we’d mentioned but it also supports third party video cameras and webcams that are Quicktime compatible. The use of the live stream from the camera enables you to see overlapping of the last frame on the screen. It’s similar to panoramic mobile apps that use an overlapping feature to patch together a large landscape scene. In our action figure movie example, the last frame or picture you took of the figure flying would be overlaid on the live stream of the camera, allowing you see where the figure needs to be placed next. Remember the point is to use gradual steps to create the movie.

The user interface of the editor will display the movie in its entirety on a scene reel to the left of the app. This shows movie creators all of the images that make up the project in order. Movies can be played and watched on the fly using the built-in stop-motion player that Smoovie calls its virtual cinema. Smoovie’s editor makes it easy to drag and drop frames to change the order, and gives users control over the aspect ratio and frames per section (1 to 30 frames).  The aspect ratio can be tweaked to view the movie in either widescreen (16:9) or in standard format (4:3).

To finalize the movie, Smoovie will give you the option to export the stop-motion video to disk, save to iTunes or publish to YouTube where you’re given a chance to give the movie some details and properties. The last step of the project is adding some audio. Sounds, music and soundtracks can be imported from your iTunes library to add the final touches.

Overall the interface of the virtual cinema within Smoovie is beautiful and the end results as you can see below, are pretty cool. The direct publishing to YouTube is a fantastic addition to the app which allows users to easily share movies with anyone in the world. This is definitely an app for everyone, adults and kids alike.

Smoovie is $29 in the Mac App Store however, users can try it before they buy by downloading the free trial available on Open Planet Software’s site.

Read next: TNW Interview with Skype at CES: The next generation of video and why the Kinect is so cool