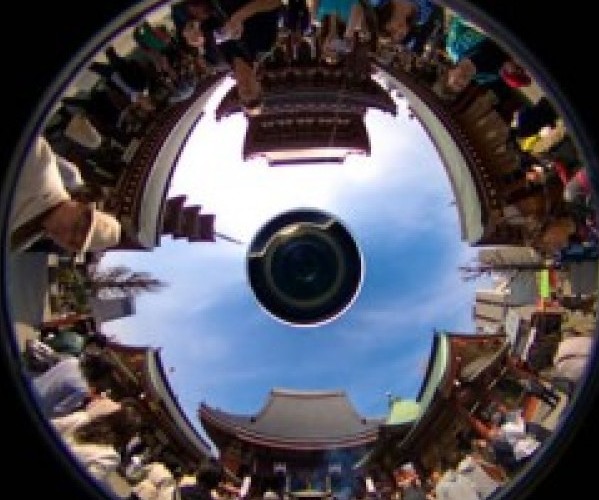 Version 3.0  streamlines the user experience, making it dead simple for anyone to create amazing panoramic pictures in a matter of seconds.

360 Panorama 3.0 is the first application to let the average user create a 360 interactive panorama (think Street View) in under 30 seconds.

The app uses the phone’s incoming images to track motion in lieu of the gyro and accelerometers. That said, if you do use an iPhone 4, if a frame drops while completing a circle while capturing a photo, 360 will use the phone’s gyroscope to fill the missing frames.

To use the app, simply tap the screen and pan your phone camera in any direction. You’ll see your panorama being built-in real-time as every incoming frame is processed, no stitching required.

Some of the slick features of 360 Panorama 3.0 include faster photo capture, stereographic photos, and choice of background colors, black or white.

After your image is completed, which literally happens as soon as you’re done with your circle, all you have to do is tap the screen again to have the image saved to the camera roll, emailed to anyone, or upload to yFrog, Twitpic, or Twitter, as well as enabling location tagging. Moreover, the app shows you how long it took one capture a photo.  As you can see, I’m a little slow, but that’s due more to wanting to take a perfect picture as opposed to general slowness.

Perhaps the most amazing feature of 360 Panorama 3.0, if those listed above aren’t enough to wet your palate, is the ability to tilt your iPhone/iPod touch in any direction and explore all aspects of your photo.  The experience is truly amazing.

If you love photography apps as much as we do, 360 Panorama 3.0 is more than worth the $2.99, $.99 today only, price tag.  The app captures amazing photographs and will amaze all you show the app to.  Pick up the app here and let us know your thoughts on the app and feel free to share your own panoramic creations.