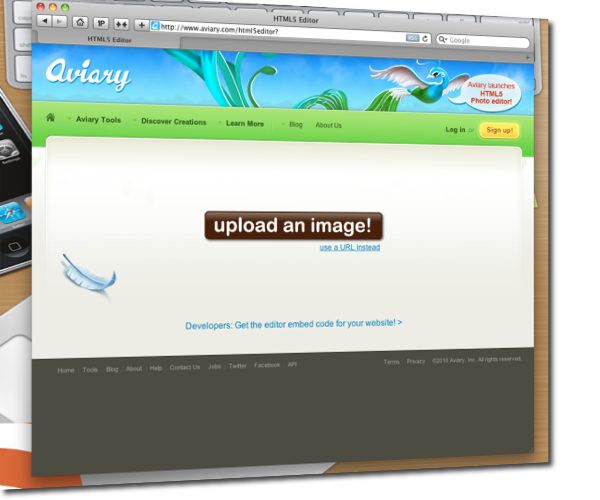 Of the web-based graphics editors out there, I’ve always admired the set from Aviary.com. Starting with basic photo editing and moving into so much more (music editing, audio editor, screen capture, vector images, colors, effects, markup), it’s hard to beat Aviary for completeness or being thorough.

Yeah, all the apps they have run on Flash. Well, until now that is.

Code-named Feather, the HTML5 powered photo editor gives you a nice, basic set of tools along with some fun ones like stickers (hats and objects that can be resized and rotated) and fun effects like Instant (think Polaroid), Toy camera, Old Camera, and Retro.

I played around with Feather for a few minutes and found that it didn’t seem to like Chrome (beta) as much as Safari, but the result is pretty interesting:

So while the outcome is nice, the app is sluggish (I thought it had crashed when I was saving it the delay was so long). The app, I feel, is more of a really cool proof of concept than hard-core app. No doubt that it will get more polish in short order and I’m sure the recent attention is bringing more traffic than would be “normal,” which might explain the sluggish behaviour. I was able to save and download my “creation”, but I couldn’t push it to Flickr, Twitter, or Facebook. That would be a feature that I hope Aviary would add quickly. Yeah, downloading is fine, but we all know pictures are all about sharing.

These criticisms aside, Aviary isn’t really going for a new image editor here to compete with (or replace) their Flash-based mainstays, this is a tool that you can embed in your own site. Right, so if you wanted to offer readers a chance to upload and edit their own images, now is your chance. If you follow the Developer’s link you can get the code to embed the tool in your own site. According to RWW; Digital Youth Network, Everloop, Fashism, HowMutch, Hyper Public, Market Publique, Rrripple, Saw You At Sinai and Shopify will be putting the widget on their sites shortly. Feather doesn’t work on mobile clients…yet…but that is said to be coming. Now wouldn’t that be cool.

It’s this extension that is the really interesting bit here. Flickr worked with Picnik.com to offer round-trip editing of pictures, but you left Flickr and went to Picnik, in this case you’re stay at Shopify to edit the pictures for your online store. Hitting closer to home, this editor is leaps and bounds better than the image editor built into WordPress now. If there were a WP plugin to add Feather to my site (or TNW), man I’d be all over that.

Give the app a try and see what you think (I suggest Safari or stable builds of Chrome). Maybe link to your creations here in the comments, lets see how creative you can be.

Read next: Mobile.me hacking rumors? Here's how to keep yourself safe.