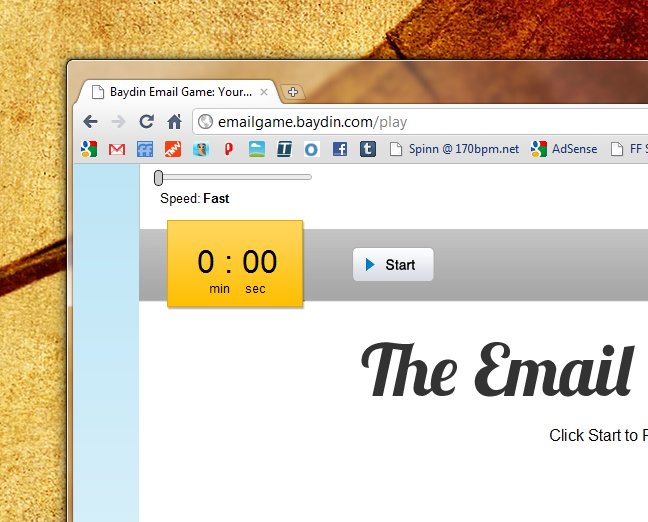 The Email Game is the latest invention from Baydin Software, meant to give you the inspiration to power through your morning inbox.

Love It: There’s something very satisfying about seeing how quickly you can get to 0. Removes you from your Gmail page so you have fewer distractions. A challenge system to your friends, via Twitter.

Hate It: There is no rewards system, other than points. It’s extremely new, so it doesn’t have the “refined” look yet.

Long story short, dealing with email sucks. There’s nothing worse than having to power through an overloaded inbox first thing in the morning or at some point in the afternoon. Experts say that we should spend less time doing just that. In fact, it’s the procrastination of email that wastes more time during my day than anything short of easy access to Netflix.

With these ideas in mind, Baydin went to work to develop a way to inspire you to power through your overflowing inbox. Because of that, The Email Game was born.

Of course, there are other choices out there such as 0Boxer, but the Email Game is different in a few respects. First off, you don’t play the game from within your Gmail. The Email Game is a separate site entirely, that uses Gmail’s authorization to log in to your account and retrieve your mail. Once you’re logged in, you’ll see a screen like this:

So as you go through your email, each function is given a points value. If you choose to skip a message, you’ll lose 25 points. Reply to something? You’ll gain 175 points. Of course, you can also choose to use Baydin’s other fantastic service called Boomerang to schedule the message to come back to you later when you’ll need it.

There are options, of course, for extending time and you can pause the game if you really need to but the overall game is simply a lot of fun and works really well.

Now, it won’t take over your entire email world, and it’s not meant to. From what Baydin tells me, The Email Game is meant to be run once or twice a day to sort through your largest amount of email. Then once you’re done, you’re given a score and then you can use OAuth for Twitter to tweet out your score and challenge your friends.

The Email Game is in a private beta, right now. It’s so new, in fact, that the site just became usable an hour ago. So if you want in, you’re going to need an invite code. Lucky for us, Baydin has provided the code “TNW” for the first 500 users.

There you have it. It’s certainly worth a look. I’ve personally fallen in love with it, and the fact that I’m not distracted by Google Chat and other links within my Gmail has only helped matters. Give it a run and let us know what you think.

Read next: The Next Web Podcast - Episode 28: It's Alive!