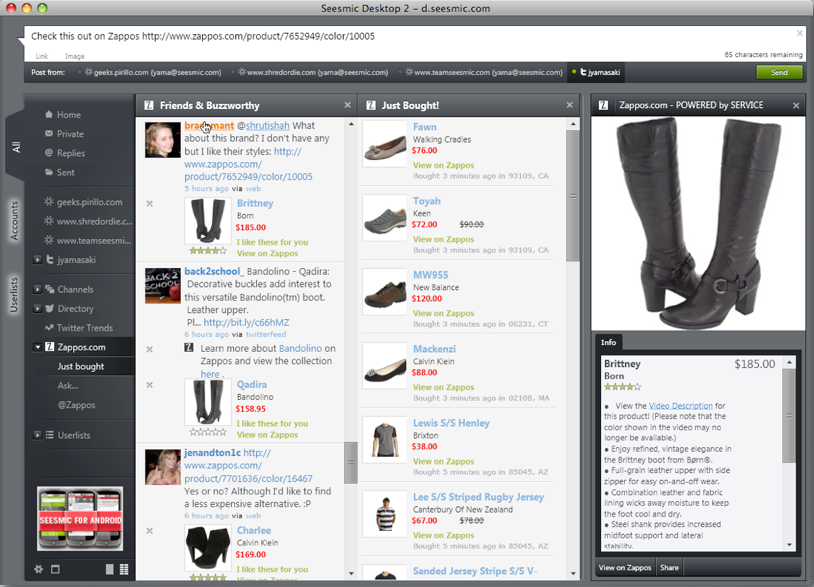 Seesmic Desktop 2 (SD2) has come out of beta right now and is now live to download. In addition to the the first full version of the SD2, Seesmic is also launching a plugin marketplace which already includes over 40 social media services that can be included into the dashboard.

SD2 comes preloaded with the following services/plugins; Twitter, Facebook, LinkedIn, Foursquare, Twitpic, Bing Maps and Google Buzz. Some of the other services that have plugins on the SD2 Plugin Marketplace include YouTube, MySpace, Ning, Topsy, Klout, Google Reader, and even Zappos. Seesmic says that there are “dozens more” plugins on the way in the next few weeks, and there is a SDK that other services can use to build new plugins as well.

With this launch Seesmic is rolling out a Mac OS X version as well, saying “Apple fanboys, rejoice”. The OS X version is in addition to the Windows version which runs on the latest version of Microsoft Silverlight (not Adobe Air) – there is no Linux version unfortunately.

We got a preview of the Windows version which installed quickly (even though we had to update Silverlight first) and the sign-in process for Twitter, LinkedIn, Facebook and Foursquare all went fine. When the app launches it launches without any columns populated, and this was a little disorienting – we’d suggest that Seesmic put some kind of a placeholder or prompt to get people to quickly set up their dashboard.

As far as performance in our limited tests with about half a dozen columns going was that the streams updated quickly, but scrolling within columns was a bit rough in some columns and better in others. We do like the tabs along the left-hand side of the app, which lets you switch between “all”, “accounts” and “userlists”, with the “userlists” tab especially useful as a way to view multiple Twitter Lists. The app didn’t freeze up at all or crash, which is always great to see, and really except for the column scrolling we didn’t notice any performance issues.

Really though, Seesmic’s play with SD2 is really around the plugins and some of them, including Klout and Zappos, have pretty interesting implementations (take a look at the screenshots below). Overall, it is a different approach to the desktop (much more akin in a way to the extensions strategy for browsers) and it will be very interesting to see how far and fast Seesmic can expand its plugin ecosystem. We wouldn’t be surprised if many more third party developers and services take a shot at developing SD2 plugins to get themselves in front of Seesmic’s audience.

Read next: Cobone.com Launches: Provides for 2 out of 24 Cities