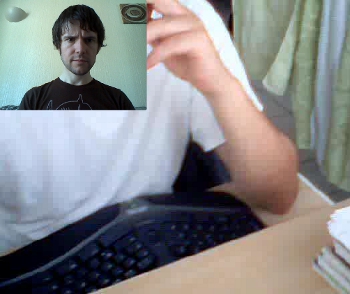 After several days’ downtime, infamous video chat service Chatroulette has returned today with what is supposedly ‘version 2.0’ and it’s clear that the novelty is well and truly over.

Besides a more plain, minimal interface, nothing’s changed. The core idea of seeing a random person on screen and having the ability to chat with them or click a (now unlabeled) ‘Next’ button to see another person is still there. Also still in place is the high proportion of NSFW participants.

In ten minutes on the site, 50% of the people I saw were, er, ‘pleasuring themselves’ while most of the others were bored individuals who were probably looking for attractive women to pleasure themselves over.

In short, it’s the same old Chatroulette. The original version of the site made a minor celebrity of its young Russian creator, Andrei Ternovskiy. Meanwhile, the site quickly slipped into mainstream popular culture, with Cartman on South Park giving it a go and Lionsgate making a rather good movie trailer on it.

However, it’s unclear how Chatroulette can possibly move on from here. Its core concept will always attract exhibitionists, voyeurs and perverts. While there’s nothing wrong with that, don’t expect it to ever get acquired by Facebook or Google. If Ternovskiy wants to move beyond being merely a ‘kid who got lucky’ he’s going to have to go back to the drawing board.