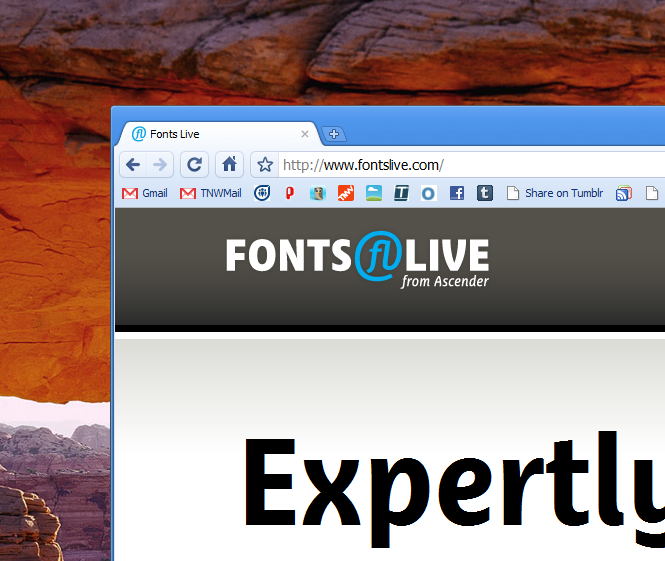 The problem has been around since the dawn of fonts on computers.  I can put all the pretty looking text that I want on my website, but if you don’t have the font installed on your own computer, then all you see is a generic replacement.  In order to fix this problem, website designers have previously used pictures of text, in the font that they want displayed.

The problem with that, of course, is that the picture is static.  It’s not necessarily able to be resized on the fly, nor is it truly integrated with the site itself.  It just sits there, bump-on-a-log style, adding decoration without function.

FontsLive is the next site that’s hoping to change how you display fonts on your own page. FontsLive is a brainchild of Ascender.  They’re the people who brought you the Droid font for the Microsoft phone, and they did the fonts for the Nook, Kindle and Palm Pre among others.  Needless to say, these guys know typography.

Of course, the immediate comparison will be drawn to typekit, and that’s fair play.  In essence, the two sites do the same thing.  You choose your font, you embed a line of code, you get beautiful fonts on your site.

What sets FontsLive apart is its pedigree, and of course the fact that the site touts its ability to have custom fonts on mobile devices such as the iPhone and iPad, all sans JavaScript.  Beyond that, FontsLive has made some amazing efforts to increase font readability.  According to Bill Davis, VP of Ascender:

“Since not all fonts render well on-screen, we deliver fonts that are optimized for web readability by our experienced team of type designers, and provide a distinct advantage for web designers and developers, and ultimately, the brand image.”

So how does it work?  The fonts are inserted into your site’s CSS via a single line of code.  Then, the fonts themselves are served to your site from the cloud.  The cloud-based option truly makes matters simple, by allowing you to not have to worry about browser or hosting changes.  FontsLive states that it will take care of all of the details for you.

Curious about giving FontsLive a shot?  Have a look at the pricing, and see if it’s the right choice for you.  The free trial is a great option, and the pay scale being set upon visitor count is a rather handy idea as well.