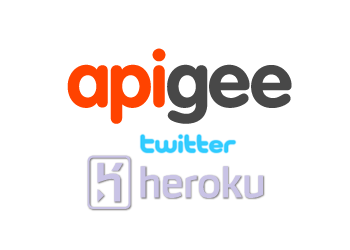 The explosion of mobile and web apps integrated with social media networks like Twitter and Facebook continues. As more services offer and expand their APIs, developers have the difficulty of wading through pages of documentation and anecdotal instruction to figure out how to code against them. Developers also struggle with managing API rate limitations as app usage grows and debugging their API integration code.

Meanwhile many developers have turned to dynamic, more concise languages and higher level frameworks like Ruby on Rails to improve productivity and agility. Today two companies, Apigee and Heroku, are partnering to simplify the development and deployment of Ruby based, Twitter integrated applications.

I got a demo from Sam Ramji, and it’s impressive. When the Heroku add-on is enabled, the Apigee configuration is auto-wired into the Ruby environment and calls to the Twitter API is proxied through an Apigee endpoint. You can do real time debugging and analysis of API calls and see detailed usage and performance statistics. The Twitter console is an “anti-documentation” playground for the Twitter API, a learn by tinkering approach to discovering and learning API capabilities.

Since Apigee is on Twitter’s whitelist, Apigee becomes the trust broker of Twitter and the rate limit goes from 150/hr to 50,000/hr with the “Basic”/freemium edition. This combined with the instant, on demand scalability of Heroku and your Rails Twitter app can now scale up front to back, prepared to meet the unpredictable usage demands driven by social and mobile activity. Ruby/Rails + Heruko + Apigee is a potent combination.

Developed by Sonoa Systems, Apigee offers an API gateway and suite of tools for developers and API providers allowing them to test, debug and protect their API services. An analytics service (which Sonoa describes as “Google Analytics for APIs”) allows developers to see exactly where, when and how their APIs are being used. Last month at Chirp, Twitter’s developer conference, Apigee announced an active reference and debugging tool for the Twitter API, as previously reported on TheNextWeb. Twitter integration is obviously a sweet spot, as they have  experienced an over 500% increase in usage in the month following the announcement.

Heroku is a fully-managed, multi-tenant, platform as a service, Rails hosting provider with powerful catalog or turn-key add ons. Heroku serves over 64,000 apps and is growing at 1500 apps per week including those of Best Buy, Shopify, and FlightCaster.

“Heroku’s Add-on system enables developers to utilize advanced features in their web applications with a single click,” said Oren Teich, VP Heroku. “The Apigee Add-on makes it possible for our large community of Twitter developers to take instantly build applications that can scale on the front end and ensure they will not hit rate limits to create a great user experience.”

Here’s a short overview video showing how easy it is to get started:

In addition, Apigee and Heroku are collaborating to put on “Social App Smackdown,” a hacker event for new and experienced developers working on Twitter & Facebook apps.  These events will be facilitated by Dave Nielsen, the co-founder of CloudCamp, and will include demos, a hack-a-thon with hands-on training, a panel of leading venture capitalists and angel investors, and an apps contest. The event will take place Saturday, July 24 from 10:00 a.m. to 6:00 pm at the Heroku offices, located in San Francisco’s SOMA area. For more information and to register, visit http://www.socialappsmackdown.com/

“As APIs emerge as the new basis of the web, the Twitter and Facebook platforms have become dominant engines of the social world,” said Sam Ramji, vice president, Apigee. “Social App Smackdown will provide an opportunity for these developer communities to get together to share best practices, collaborate on tips and tricks, build new innovative applications, and start new companies.”