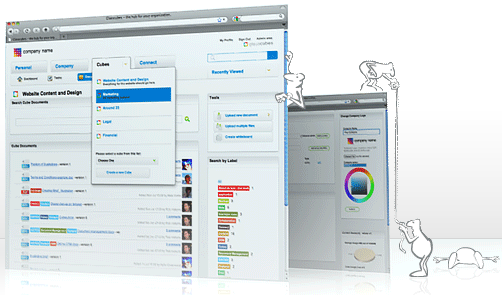 If you’re a small business looking for an online collaboration solution, you could do a lot worse than check out Glasscubes.

Designed as a ‘virtual intranet’, Glasscubes provides businesses with a file management, project management and CRM solution all in one tight package.

We profiled the service back in October with a glowing review and since then the team behind it have upped their game with an impressive list of new features.

Most significantly, Glasscubes has now opened up to support third party cloud services. It has been approved as part of Google’s recently launched Apps Marketplace. This means you now get integration with Google Calendar as part of the package. iCal feeds have also been added to allow integration with other calendar apps, such as Outlook. Support for Google Docs is promised soon, but in the meantime you can use recently-added Zoho Docs integration for your online document editing needs.

Other improvements include a cleaner UI and improved file management. CEO Wayne Pope tells me RSS feeds from workspaces will soon be made available, along with new privacy options and project work time tracking.

Glasscubes is a truly international startup with a team spread across Europe, including London and Monaco. Pope tells me he wants draw inspiration from this situation by targeting often-ignored non-English speaking markets across Europe. Glasscubes is currently being translated into eight different languages.

As a Brit in the south of France, an area with very few internet startups, Pope is also aiming to organise meetups for entrepreneurs in the the Monaco/Cote D’Azur region so get in touch with him via Glasscubes if you’re interested.

Read next: SimpleGeo Comes Out of Beta, Interview with Co-Founder Matt Galligan