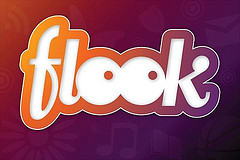 In the midst of the continued attention being given to location-based iPhone apps, The Next Web takes a look at Flook which offers a fresh perspective on location discovery.

Flook has been in the iPhone app store since late 2009 and is beginning carve out quite a different niche for itself in what is becoming a busy market for apps which use location as their central theme.

The likes of Foursquare and Gowalla place great emphasis on racking up as many check-ins as possibles in order that users can add as much landmark data as possible to their growing databases.

Foursquare encourages multiple check-ins and the addition of new locations by awarding greater ‘status’ to more regular users (“I’m the Mayor of Shudehill Bus Station!”), whereas Gowalla incorporates a half-implemented gaming element to its service by allowing users to collect or deposit random items at various locations.  In both cases, it’s something of a numbers game.

The app is created by UK-based  Ambient Industries, which describes itself as a “small start-up with big funding”!  It shows!  Flook features slick graphics throughout and enables users to create bright, colourful, stand-alone ‘cards’ which are reminiscent of collector’s trading cards for sports and movies.

Each card gives you the opportunity to incorporate a title and photo along with supporting commentary.  Brightly coloured borders denote which category you have placed that card into.

Categories are less extensive than the comprehensive options provided by, say, Gowalla, but options such as ‘Art’, Place To Go’, ‘Funny’, ‘Local Secret’, make the use of Flook a much more creative endeavour than simply feeling that you’re creating a crowdsourced directory as part of someone else’s business plan…  that numbers game again.

So Flook encourages its members to be creative and add valuable content  whilst adding locations rather than simply racing to check-in at as many places as possible.

Yes, the social networking elements are there, including Twitter integration, the opportunity to comment on your own and other people’s cards and a, still relatively well hidden, mechanism for following other Flook users within the service itself.

For me, Flook’s triumph is its graceful mapping implementation.  Flip over any cards you have made and you’ll be presented with a map  upon which a pin has been created as your Flook card in miniature pointing to the GPS location suggested by your iPhone.

Now we all know that the phone’s GPS ‘guesstimate’ can be somewhat less than accurate.  If the suggested location is some way off the actual location of your landmark, simply press the padlock icon, slide the map around under the pin until you hit the precise location and hit the padlock again.  Done!

As with all location-based apps, you have to accept that if you wish to add a location you have to stand around for a couple of minutes once you’ve arrived there, searching to see if it has already been added to the service, or in Flook’s case creating your card.

Also, Flook’s emphasis on adding photographs, whilst being a good thing, may be a little frustrating for users of established services such as Flickr which can be added to from several iPhone based Twitter clients.

Nevertheless, it’s worth giving Flook a try, it’s free after all.  Initial ‘design over content’ fears are set to one side as its charm comes through.  There’s more work to be done, but there isn’t an app in the store which hasn’t got a new release around the corner.