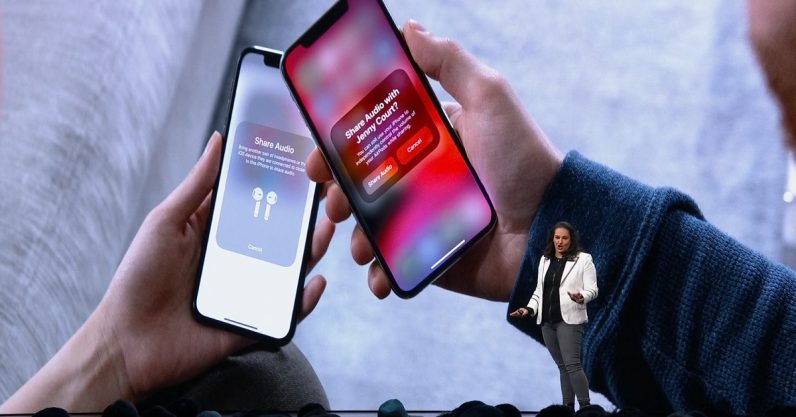 Apple revealed Audio Sharing at today’s WWDC event. Now, if you want to share a song or a video with a friend, you’ll be able to do so wirelessly by sending the audio to their AirPods.

The company didn’t reveal exactly how this trade would happen: we didn’t see a demonstration, just a still image of two phones hovering next to each other. Presumably it’ll be part of the sharing option in Apple Music and other audio-based apps. You’ll get the option to share audio with your friend’s phone when you bring it close to theirs. It’s basically the next-generation (and more hygienic) version of taking an earbud out and putting it into your buddy’s ear.

Apple also added Handoff support to HomePod, meaning you can also quickly share a song (or any other audio playing on your phone) with the room by moving your phone close to the pod. It’ll automatically pick up and begin playing the audio, and you can “take it back” via the same gesture. Again, Apple didn’t reveal how this would handle this Handoff beyond a single still image, but it sounds like an easy way to get your tunes going in a hurry.

Another revelation that came packed in alongside other updates to the AirPods — namely, that you’ll now be able to respond to Messages directly while your hands are otherwise occupied thanks to Siri. While it was only demonstrated briefly, it apparently allows Siri to read out Messages to you via your AirPods. You can tell Siri how to respond, and she’ll send the message along for you. Presumably we’ll see more about this at a later date.

According to Apple, these features will be part of iOS 13, which is coming out for users this fall.

Read next: The new iOS Photos app makes it easier to manage and edit photos