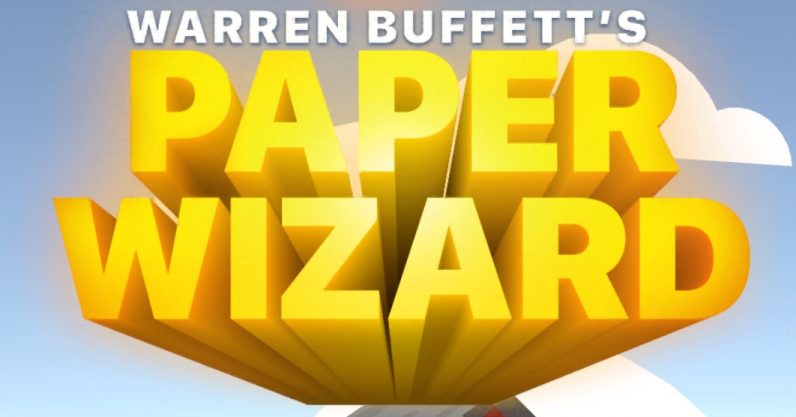 Apple has apparently made its first game in years, in partnership with, of all people, Warren Buffett, CEO of Berkshire Hathaway. The game, called Warren Buffett‘s Paper Wizard, allows you to recreate the early career of the titular character, tossing newspapers at houses.

The game looks simple enough. You ride around a neighborhood while some jaunty music plays. In the manner of Paper Toss, you drag your finger to the bottom of the screen to set a flight trajectory, then release to send your newspaper flying towards the house-shaped targets, avoiding hitting birds, lightposts, and mailboxes. It’s not strictly realistic — towards the end of the Omaha neighborhood, you appear to take flight and have to throw your newspapers at the sides of apartment buildings, but it’s still a fun little app.

It’s not called an Apple game up front. The name of the studio that developed the game, on the App Store, is Wildlife Design Inc, though I can’t find any record of a game studio by that name when I search. According to the information on the same page, the copyright for the game belongs to Apple. Also, the FAQ for the game says, in answer to a question of how many people made the game, “Warren Buffett was the mastermind, and he had a little help from his friends at Apple.” Also also, the terms of use call it a “mobile game maintained and operated by Apple Inc.” Still, we’ve contacted Apple for more information.

The last iOS game Apple put its name to was Texas Hold’em, originally a clickwheel iPod title released in 2006 (basically the Stone Age in tech years). That app — the version of it available for iPhones, a noticeably different game — was pulled from the market in 2011. It’s the only game Apple has made itself for iOS, until now apparently. Apple‘s never shared exactly why it pulled the app — though poker doesn’t really seem on-brand for it. Apple has since stayed out of the gaming realm except as a host, until this year when it announced plans for Apple Arcade.

The team-up is an appropriate one, given how chummy Buffett‘s company appears to be with Apple — or at the very least, Apple CEO Tim Cook. Cook was recently spotted at Berkshire Hathaway’s annual shareholders meeting, where he expressed delight that the company owns quite a large amount of Apple Stock.

According to the same FAQ, this game is an offshoot of Buffett‘s hobby of holding a paper toss competition during shareholders’ meetings. At time of writing, a cartoon avatar representing Buffett holds the game‘s high score.

Read next: Microsoft files patent for controller with Braille readout