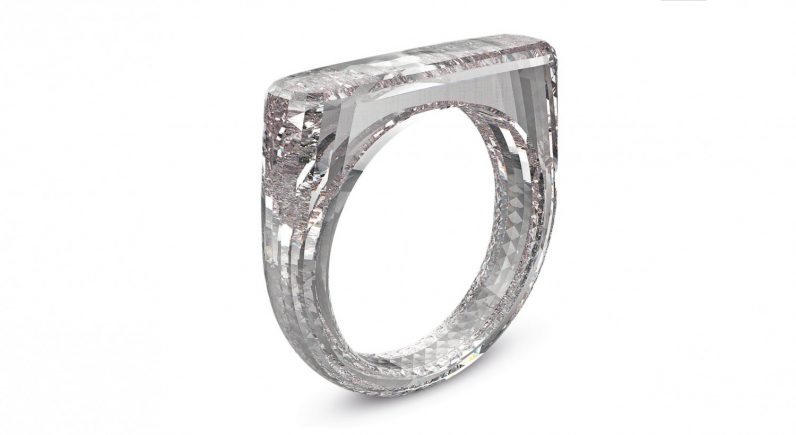 Jony Ive is best known for his role defining Apple’s hardware aesthetics, but every once in a while he dabbles in design outside of Cupertino.

Case in point: Ive and long-time collaborator Marc Newson created a diamond ring. Not just any diamond ring – it’s made entirely out of diamond. It’s expected to sell for $150,000 to $250,000 at a Sotheby’s auction in Miami on December 5.

I can’t say it’s the most attractive ring I’ve ever seen, but I doubt there’ll be any problem selling it – and it’s for a good cause.

As with previous Ive auctions – like a shiny red Mac Pro and a fancy Leica camera – the ring is being sold for charity. Specifically, that’s the Product (RED) charity for HIV/AIDS Apple frequently supports, although there’s a  conspicuous lack of crimson in the diamond.

Here’s how Sotheby’s describes it:

Sir Jony Ive, Apple’s Chief Design Officer, and renowned industrial designer Marc Newson – having curated the (RED) auction five years ago – have, this year, designed a unique ring, made exclusively for (RED) by Diamond Foundry®. Consistent with their mutual obsession with transforming raw material into objects of value, Ive & Newson’s design is singular, clear and un-compromised by the traditional metal settings and bands that have previously been required to create ‘diamond rings’. Theirs will be created by removing material rather than adding – an ambition made possible by the extraordinary scale of the stone which will enable the ring to be completely made of this material.

Creating a ring-shaped diamond is no small feat; the diamond block will be faceted with several thousand facets, some of which are as small as several hundred micrometers. The interior ring will be cylindrically cut out for the desired smoothness using a micrometer thick water jet inside which a laser beam is cast. The finished ring will have between 2000-3000 facets which has never been seen before on a single piece.

The gemstone will be created by Diamond Foundry®, the certified carbon neutral diamond producer who has pioneered and developed the proprietary technology to form diamonds safely and sustainably.

Jony Ive has reportedly envisioned future iPhones would look like a single sheet of glass. If true, it only makes sense he’d want to make a diamond ring that’s a single chunk of diamond.

Let’s just hope whoever ends up buying the ring never has to resize it.