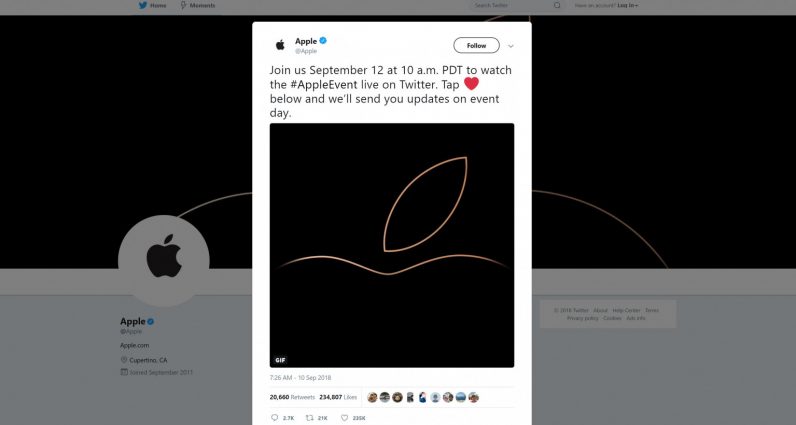 It’s had an account since 2011, but never set a profile picture until September 2, 2016. A few days later, the company sent out its first few tweet – accidentally leaking the iPhone 7 in the process, about an hour before the event livestream. It then deleted those posts, and – despite having over two million followers – hasn’t posted another tweet in the two years since.

That’s why it’s a bit surprising that Apple has decided to livestream its iPhone XS launch on the platform this year, as first reported by TechCrunch.

While the company hasn’t posted a public tweet on its profile since the 2016 screw-up, it has sent out promoted tweets (AKA ads), one of of which asked users to “Join us on September 12 at 10 AM PDT to watch the #AppleEvent live on Twitter” Furthermore, if you like the post, Apple will send you updates about its announcements:

Join us September 12 at 10 a.m. PDT to watch the #AppleEvent live on Twitter. Tap ❤️ below and we’ll send you updates on event day. pic.twitter.com/i9mGHTKhvu

TechCrunch has since confirmed the stream will be live on Twitter itself, rather than Apple linking you to its own stream page.

It’s nice to see Apple opening up. After years of event streams being exclusive to Safari, the company added support for Edge in 2016, and then newer versions of Firefox and Chrome for this year’s WWDC. The company also launched its Instagram account about a year ago, showing it was willing to be a little more social. Perhaps the Twitter livestream is another sign the company is increasingly willing to reach beyond its walled garden.

Stay tuned to TNW on Wednesday for all our coverage of the event. In the meantime, you can read our predictions of what’s to come.

Read next: Amazon's Show Mode Charging Dock is a must-have for parents who own Fire HD tablets