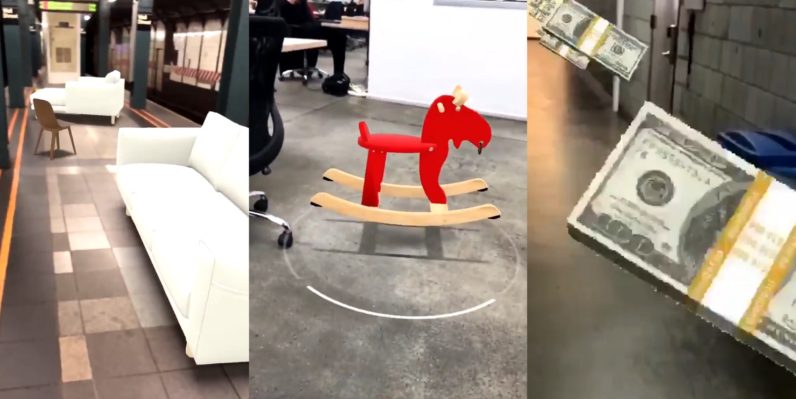 With iOS 11 comes the iOS ARKit, which makes it easy for developers to create augmented reality apps for iPhones and iPads. So far, several developers have released AR apps of varying degrees of usefulness — such as a sudoku app that spoils the game — but one thing’s for sure: Twitter is having a blast with them.

Here are some of Twitter’s best uses of ARKit apps, from creative furniture placement to floating money.

One of the most popular ARKit apps so far (if the videos on Twitter are anything to go by) is IKEA Place, an app which allows users to place virtual Swedish furniture in whatever space they’re in.

Obviously it’s intended to allow people to design their IKEA rooms before lugging home those heavy flat packs. But some have been using it to decorate some other, less homey places. Case in point:

Finally I can see if the rocking moose will fit in the office! #IKEA #AR #IKEAPLACE @madewithARKit pic.twitter.com/Pp53wIOn6Q

Some showed off the ARKit’s previously-unseen touch capabilities (which aren’t actually a thing, we’re teasing):

Another This app lets you put gifs in the real world — simple as that. At least one Giphy employee has used it to fill her world with Beyonce:

Playing with the new #GIPHYWorld AR app! Of course, to stay on brand I filled my world with GIFs from Lemonade! 🍋 🐝https://t.co/dsQ9ygCaDk pic.twitter.com/N09wAUzwUX

Some gifs have proven to be just as good in the real world as they are on the screen:

Still, I think anyone who uses the app from now on is going to have a hard time topping this use of gifs as bait:

How to motivate students to come to office hours #ios11 #giphyworld @giphy pic.twitter.com/1CPEQKtuPU

What are your favorite AR apps for iOS 11? Let us know in the comments.

Read next: Cryptocurrency jobs are popping up like crazy — even for non-techies