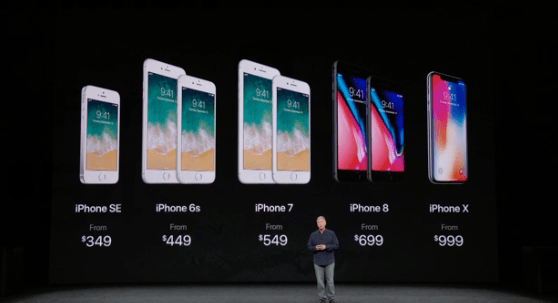 If you’re interested in buying one of the new iPhones Apple revealed on Tuesday, you might find the prices a little hard to stomach. Between the iPhone 8’s beautiful glass back and the iPhone X’s glorious lack of bezels, they make a tempting package, but the price — the $999 price tag on the X in particular — can be a little daunting.

Knowing this, several outlets offer trade-in deals on iPhones that make it easier to upgrade.

Keep in mind, this isn’t a comprehensive listing of iPhone X deals. Those will probably change daily, up to and including pre-order day. Rather, these are some general trade-in suggestions and resources you can use to get credit for the next iPhone you plan to have.

If you have an older iPhone that’s still in decent working condition, you can always mail it in Apple via their Trade-Up Program. The page lists several phones and what they’re worth, though it doesn’t include an estimated iPhone 7 value.

However, it does link to another page hosted by the Brightstar Corporation with a tool that lets you calculate the value of your phone based on condition and carrier. This page does have estimates for the iPhone 7’s trade-in value. I tested a 32GB unlocked 7 with all conditions ticked to “good,” and was given an estimate of $375.

If you want to trade your phone in for Amazon credit, which you can then use towards your next phone, you can use its Trade-in page, which has several phone and tablet options. Select your phone, pick the model closest to yours from a list, and answer the usual questions about its condition.

Currently, it lists an unlocked 128GB iPhone 7 as being worth around $300.

Unlike the more non-specific options listed above, some carriers are already offering deals on Apple’s new phones. All carrier deals that I could find are rather ambiguously phrased — it’s not clear if some of them apply only to the iPhone 8 or the iPhone X as well.

The #iPhoneX looks EPIC. & you know @TMobile will carry it! Plus we're giving you up to $300 off ANY new iPhone w/ trade-in!! pic.twitter.com/EADSP3WU7A

T-Mobile CEO John Legere announced on Twitter shortly after the reveal that T-Mobile customers with new-ish iPhones (models 6 or newer) could get $300 credit towards a new phone when they trade the old one in — although subsequent research revealed it would be given in an installment plan of $12.50 a month over a period of two years.

Meanwhile, AT&T said it will give a 32GB iPad for an extra $100 to any customer who purchases an iPhone 8 and a plan — but, according to The Verge, only if they’re a DirecTV or U-Verse customer.

If you’re willing to go slightly underground, then you can always sell your old phone on listing sites like eBay and Craigslist. It’s not the best place to find a deal on a mint condition phone, since some sellers take the opportunity to mark prices up. Buy there at your own peril.

eBay, however, also has a page specifically for phone trade-ins. I noticed it already lets you mark your trade-in model as an iPhone X, so clearly it’s on top of things. It offers you the chance to get quick cash on your phone via eBay Valet, assuming your device is in the condition you say it’s in. A used 32GB iPhone 7 with the original box is listed on the site as about $330.

Know of any other good ways to trade in your iPhone for the latest model? Tell us in the comments!