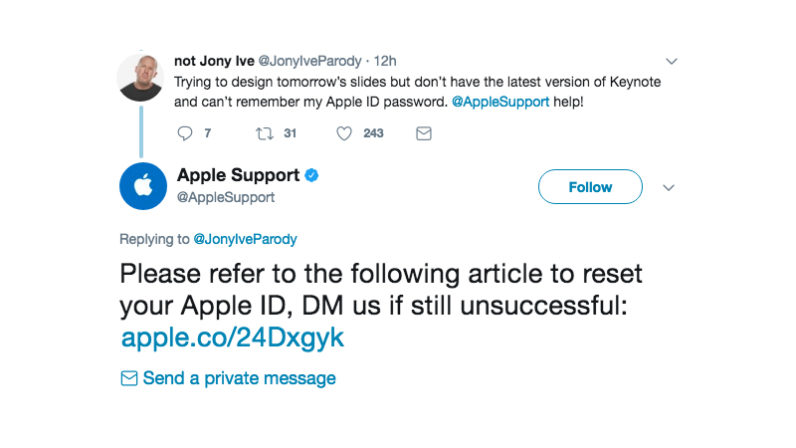 One of my favorite accounts to follow on Twitter is the notorious Jony Ive parody account, which spews hilarious tweets about everything Apple from the perspective of the company’s legendary chief design officer.

The reason I especially enjoy going through his feed is how adeptly he manages to infuse Apple puns with poignant criticism aimed at their traditions and products. In fact, some of his comments are so sharp that even Apple Support seems to take them seriously.

Earlier today the parody account punked the Big A for its inability to keep upcoming announcements from leaking to the public, suggesting the media has pretty much already lifted the lid on most of the new features and devices slated to be unveiled at today’s iPhone keynote.

Then he jokingly went on to ask Apple Support for help, claiming he was struggling to put together the slides for the forthcoming event because his forgotten Apple ID was preventing him from updating his Keynote app to the latest version.

Trying to design tomorrow’s slides but don’t have the latest version of Keynote and can’t remember my Apple ID password. @AppleSupport help!

But his call for help rang true to the Apple Support team, which promptly replied to his tweet with advice how he can reset his Apple ID to update Keynote.

Here’s the canned response the support team responded with:

Please refer to the following article to reset your Apple ID, DM us if still unsuccessful: https://t.co/fJnZYmbI9N https://t.co/GDrqU22YpT

As you can expect, the confused response quickly gathered the attention of the Twitterverse, with numerous users – including the Jony Ive parody account – flocking to take a crack at Apple Support:

are you kidding me 😂

I love that they reply to this. 🤣

Jony Ive is preparing for tomorrow’s keynote, and you’re asking him to read an article on https://t.co/CxoFd7kRCn? Incredible.

Given that Apple Support receives piles of similar requests for help on Twitter each day, it’s understandable why it could be difficult to seed out the real from the fake ones. Still, this one was actually pretty funny. And here’s the kicker: Jony Ive is apparently particularly sensitive to parodies of himself.

Meanwhile, make sure to follow the Jony Ive parody account during today’s iPhone keynote – I promise you won’t be disappointed.