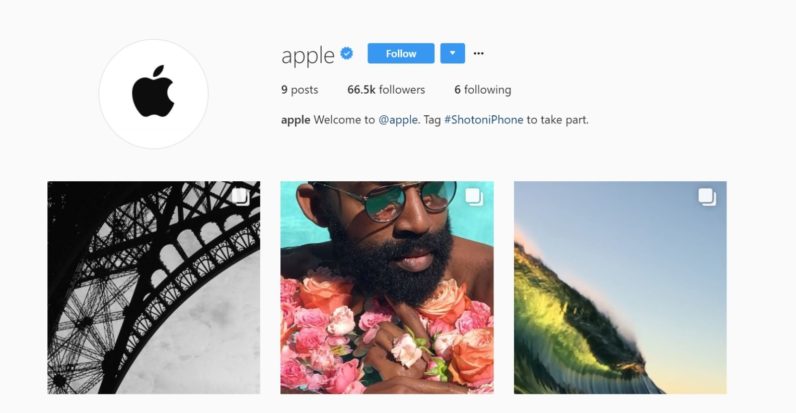 Apple doesn’t exactly endeavor much in social media, but that’s been changing of late. After a false start with Twitter, now the company is launching an Instagram account (@apple). Naturally, it’s meant to show off photos from the iPhone.

Apple being Apple, the account is already growing at an impressive pace. It managed to build up 40K followers in about 40 minutes, and as of writing is sitting at a cool 80K. At that pace, it will likely hit one million followers within the next couple of days.

The account appears to primarily be an extension of Apple’s ‘Shot on iPhone’ campaign which you’ve probably seen in billboards and TV ads. This time, however, Apple is being a bit more interactive. Rather than simply finding photos online or hiring pro photographers, Apple is asking you to submit your own photos by tagging them with #ShotOniPhone

In other words, it’s basically a way for the company to fool people into thinking there’s anything particularly exceptional about the iPhone’s camera. That hasn’t been the case in years.

I mean, don’t get me wrong; iPhone’s camera is very good. The Apple revolutionized mobile photography and the iPhone 7 certainly hits the “good enough” mark for most people. But Apple the campaign is about suggesting the iPhone’s photos are somehow special relative to the competition, which they’re not (despite what an ex-Google VP may think).

If anything, the iPhone noticeably lags behind the Google Pixel, Galaxy S8, LG G6 and maybe other Android phones too. I’ve seen that in both my own use and numerous blind tests. Even the camera’s fancy depth effect was pioneered by Huawei – and arguably done better too.

Point is, as always, the quality of a photo depends more on the person behind the camera.

But hey, Apple’s marketing team has to make money. There’s nothing wrong with the company showing off its camera tech, and the campaign is a nice way to help iPhone photographers reach a wider audience.

Just don’t be fooled into thinking the iPhone’s camera is all that special. Maybe the iPhone 8 will change my mind.

Read next: This insanely fast robot will make Adidas shirts cheaper - and kill hundreds of jobs