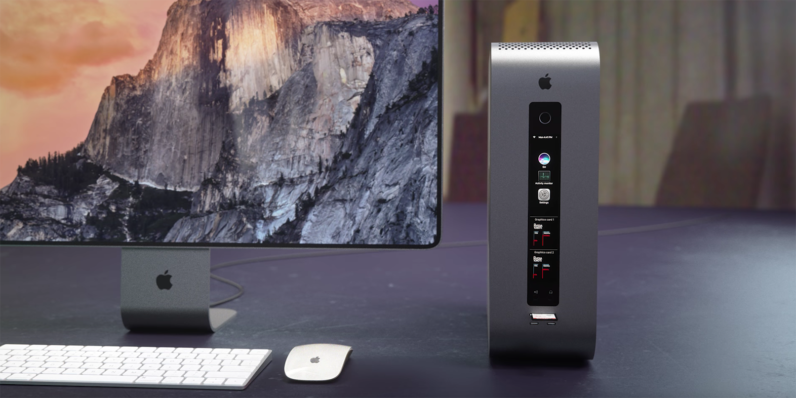 Last week, Apple admitted a mistake. Hold the applause. After gathering a handful of journalists to what I can only imagine is the company’s secret volcano lair, Apple copped to screwing up the trashcan-shaped Mac Pro, and vowed to do better.

Designers at CURVED/labs took a stab at it. The conceptual design looks a lot like the Mac Mini, but in the best way possible. It features two slots for full-sized graphic cards — hello GTX 1080 — and an easily accessible area housing the processor, RAM, and storage.

Perhaps most importantly, it can breathe. The fundamental flaw with the Mac Pro — aside from it being ignored for over three years now — was its design. The trashcan-shaped PC wasn’t built for upgradability, and even the parts it shipped with caused heat issues. In the artist’s rendering, the newer, Mac pro would have holes on top designed to allow hot air to escape, making this a far better option than the existing Mac Pro — even though it doesn’t exist.

It’ll have Touch ID for power, a Touch Bar for… something, I’m sure, and ports out the wazoo: USB-C, USB-A, and HDMI.

It’s sort of a Mac-lovers wet dream. I’d buy this right now. Sadly, though, we’ll all have to wait. Some rumors suggest the product won’t be done until 2019. It’s kind of odd, really, as the iPod — arguably Apple’s most innovative creation — was designed, manufactured, and shipped in all of nine months.

Taking on the Mac Pro is a solved problem — PC gamers have been building high-powered rigs for years. I can’t, for the life of me, figure out how it can take this long to design a new PC.

But, then again, does anyone ever truly understand what Apple is doing?