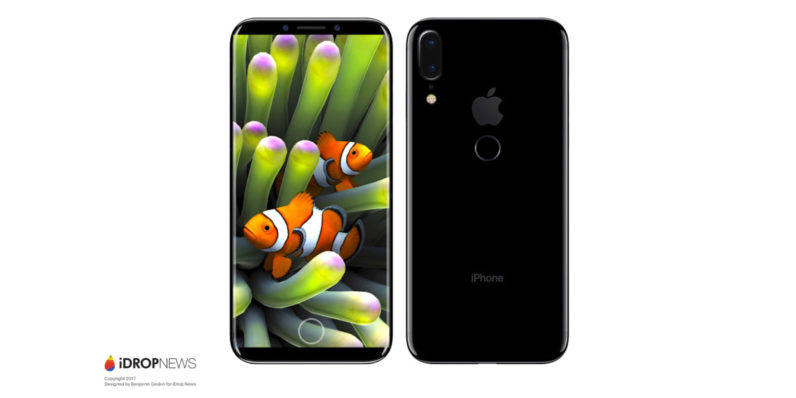 The Apple rumor mill churns once again: A new report by iDrop News suggests the next iPhone will look an awful lot like what we’re expecting from the Galaxy S8 (not to mention a few other Android devices).

The latest details were supposedly obtained by someone “who has spoken privately with a Foxconn employee,” so just like with your friend’s uncle who works for Nintendo, you should take the rumors with a grain of salt.

First up, the site corroborates a previous report from Mac Otakara that the next flagship Apple handset won’t be called the iPhone 8, but rather the iPhone Edition – just like the fanciest versions of the Apple Watch. It’s unclear what the moniker would be for the other two iPhone models Apple is rumored to be releasing.

iDrop News provided this render, which looks “almost identical” to the prototype its report is based on:

Here’s a comparison with the original iPhone for good measure. Note how though the device is significantly taller, the slim bezels means it’s not much wider:

Look familiar? The design is a stone’s throw away from the upcoming Galaxy S8 and LG G6, abandoning a front facing button and minimizing bezels by implementing a taller aspect ratio. But hey, I suppose there’s only so much you can do when you fill up the entire front of the device with a screen.

Here are some renders of the Galaxy S8 and LG G6 for comparison:

One key difference from previous renders is that the dual camera setup is stacked vertically rather than horizontally, which could theoretically aid depth perception when using the device mounted in an AR or VR headset.

Also unlike previous reports, which suggested the device would have TouchID under the display, iDrop News suggests Apple is simply apeing Android devices in moving the button to the rear. That inconvenience to long-time Apple users could be mitigated by a possible implementation of face or iris detection (again, a la Samsung).

The rumor claims that Apple won’t be using a glass or ceramic back, as previously rumored, but is using a more traditional metal back. Meanwhile, the 5.8-inch OLED screen won’t be totally curved like on some of Samsung’s devices – it will simply run edge to edge and use that mild 2.5D curvature already seen in current devices.

Though there’s no evidence to back up the claims, much of what’s in the report seems reasonable.

For one, it always seemed unlikely the next flagship iPhone would be called the iPhone 8 or 7s. It’s the device’s 10th anniversary, after all; Apple will want something a little more ceremonious than a simple number. That said, the more traditional 4.7 and 5.5-inch models might still continue the traditional name scheme.

If the rumors all hold up, I find it striking how… unexciting the new design looks. There’s little about it that we haven’t already gotten from the likes of Samsung and LG, and Xiaomi has arguably done the bezel-less design the best with the Mi Mix. Here’s to hoping Apple has something more up its sleeve than just a bigger screen – perhaps in the form of some truly revolutionary mixed reality features.

Read next: 9 of the best Facebook Stories filters that put Snapchat to shame