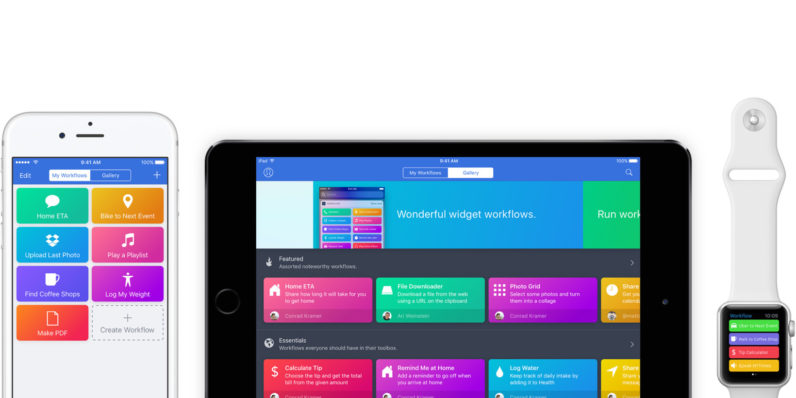 Apple has acquired Workflow, an automation app for iOS that lets you connect apps and create quick shortcuts to actions like texting a contact to let them know you’ll be late for your appointment, find a convenience store near you, make PDFs from Web pages and record an audio note to yourself that’s accessible in the Reminders app.

The terms of the deal were not disclosed. Interestingly, Apple isn’t killing off the product; in addition to adding the Workflow team of three into its fold, it’s also making the tool available for free.

Confirming the deal, Apple lauded Workflow’s capabilities in a statement to TechCrunch:

The Workflow app was selected for an Apple Design Award in 2015 because of its outstanding use of iOS accessibility features, in particular an outstanding implementation for VoiceOver with clearly labeled items, thoughtful hints, and drag/drop announcements, making the app usable and quickly accessible to those who are blind or low-vision.

If you haven’t yet downloaded the Apple Design Award-winning app yet, now’s a great time to do so. It’s cleverly designed to be accessible from the share sheet of just about any app, includes a Today widget and works with Apple Watch. Grab it  from the App Store for your iPhone or iPad.

Apple has acquired Workflow, a powerful automation tool for iPad and iPhone on TechCrunch

Read next: Google's bringing audio-only calls to Duo at last, but I'll probably never use it