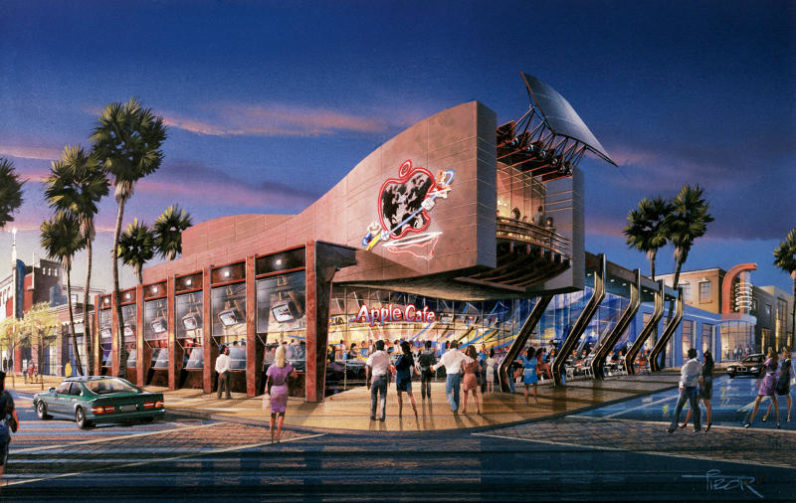 While few would disagree that throughout the years the Apple Store has gradually cemented its presence as an integral part of the overall ‘Apple experience,’ it turns out the Cupertino behemoth didn’t always envision its retail spaces as we know them nowadays.

Developed in collaboration with Mega Bytes, the Apple Cafe was imagined as an innovative internet cafe with a “high tech” interior design that reflected the forward-looking mindset the Big A aspired to stand for.

Radically diverging from the facade of traditional retail stores, the modernist locale was slated to bring together food service, paraphernalia retail, user support and computer sales into one single common space.

“They didn’t know exactly what they wanted to do at first. I don’t know if they had the idea for a cafe or that was something we came up with,” Christopher told Fastco Design. “It was the world’s first cybercafe. There wasn’t a cybercafe at this time, and a lot of people who didn’t have computers were looking for a way to go use them. Back in 1998, this was a radical idea!”

The idea for the Apple Cafe originally came in 1996, a short while before Steve Jobs eventually returned to the company and launched the signature Apple Store few years later.

While things ultimately never panned out, Christopher says Jobs opted to put the Cafe “on hold because he had this idea for an Apple Store.”

“It’s interesting because this was not Apple as Apple is today. They were just a computer company. But they were interested in, again, making computers for everyone,” he added.

The Surprising Genius Of Apple's Dorkiest Idea on Fastco Design

Read next: Zelda: Breath of the Wild is getting a DLC Expansion Pass (and really, that’s okay)