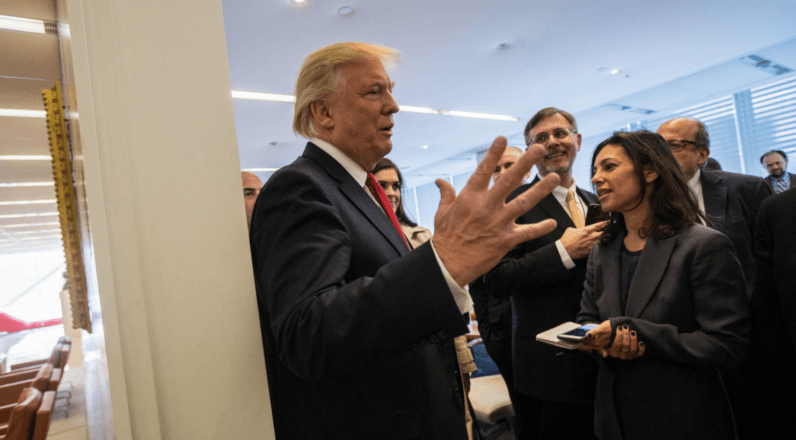 Speaking to The New York Times, Trump said he received a call from Apple CEO Tim Cook after winning the election earlier this month.

Trump said Cook understood. He also contends Apple will turn to US manufacturing based on an incentive plan including a “very large tax cut” and “substantial regulation cuts” for corporations.

But we’re going for big tax cuts, we have to get rid of regulations, regulations are making it impossible. Whether you’re liberal or conservative, I mean I could sit down and show you regulations that anybody would agree are ridiculous. It’s gotten to be a free-for-all. And companies can’t, they can’t even start up, they can’t expand, they’re choking.

Reports suggest Apple has at least a passing interest in exploring a manufacturing facility in the United States, apparently going as far as to open a feasibility study about producing the iPhone at a US plant. Foxconn chairman Terry Gou pointed out the obvious: increased costs in production lead to higher costs for consumers.

While we don’t have concrete cost figures (and Apple will never provide them), analysts predict the iPhone 7 costs approximately $224.80 to make in China. Here’s the part that you can’t overlook:

Good luck getting labor down to $5 a unit in the US.

That’s not the only problem. Currently, it’s doubtful the US has the skilled labor force capable of matching this kind of output. According to Tim Cook:

China put an enormous focus on manufacturing. In what we would call, you and I would call vocational kind of skills. The U.S., over time, began to stop having as many vocational kind of skills. I mean, you can take every tool and die maker in the United States and probably put them in a room that we’re currently sitting in. In China, you would have to have multiple football fields.

Tax cuts for companies willing to move production back to the United States are, in theory, a great idea. As with all things Trump though, the reality is never that simple.

Luckily, Trump has a backup plan in the form of a 45 percent tariff on imported goods. Again though, it’s a solution that sounds great at the surface, but fails to take into account outside factors that could lead to much bigger problems should it come to fruition. In the real world, there are consequences for solutions like these, and an increase in manufacturing jobs could lead to a temporary boon, and then a major crash as other countries start imposing the same (or worse) tariffs on US-imported goods.

Tariffs, as it turns out, work both ways.

Trump, who criminally oversimplified solutions to globalization, is now about to meet with the reality of why it can’t be stopped.

Read next: A Turkish startup made a real life Transformer -- and it's up for auction