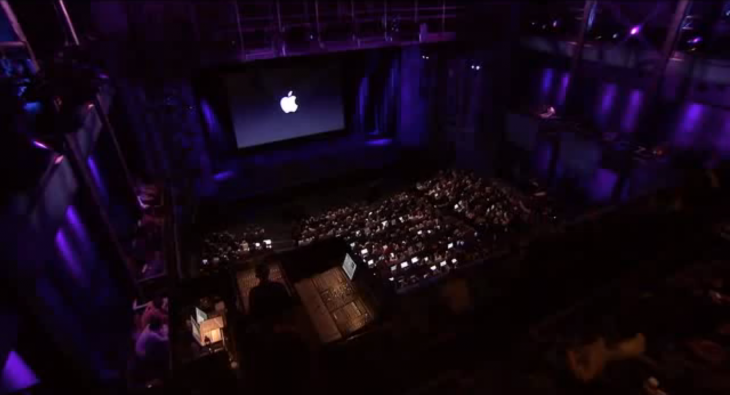 Apple keynote events are known as the best shows in the industry. They are well rehearsed, perfectly presented and highly anticipated events. Too bad we only have a few of them a year.

For those of you who want to get in the mood for the next one here is our selection of the 5 most exiting Apple keynotes we’ve seen. Enjoy, and post your own favorites in the comments!

The original iPhone introduction in 2007 was one of the most important moments in Steve Jobs’ and Apple’s history. It was later described as a ‘bet-the-company’ event and many people held their breath as the keynote progressed and none of the system crashed. None of this tension shows as Steve Jobs, visibly excited, introduces not one, but three new devices…

Steve Jobs announced a ‘Breakthrough digital device. (Hint: it’s not a Mac)’ in 2001 when Apple’s goal was to become the digital hub in your life by making it easy to connect to cameras, MP3 players and your VCR. It ended up becoming more than just that, and transformed almost every category for which it wanted to become a hub:

This event is different from any other Apple keynote event. It is the press conference that Steve Jobs gave to explain what was causing iPhone 4 antenna issues; the little crisis known as ‘antennagate’.

It is interesting because instead of taking the initiative and showing the press what they would be writing about Apple was reacting on criticism and found itself in a position where of having to defend its product:

This is the iPad introduction special event in 2010. It was one of the more surprising and at times even most awkward events we’ve seen from Apple. The setting was different, with Steve Jobs sitting on a couch instead of walking around to show off the iPad but I also remember the mixed reactions from people who watched the event.

We needed a few weeks to get used to the idea of the iPad. It looked weird, with the oddly-spaced icons and it didn’t have flash and it wasn’t immediately clear why we needed one. The most heard criticism was ‘It is just(!) a big iPod touch!’. Since then Apple has sold more than 200 million of them, so we got used to them pretty fast. Watch the whole spectacle:

The Cube. One of the few products where Apple really missed the ball. It didn’t sell well and the ones that did often had to be replaced because the translucent case cracked at the seams.

This is the Cube introduction and it almost hurts to watch Steve being so proud about it and knowing it will end up a dud. During the keynote, Steve also introduced a new mouse and openly talked about how people didn’t like the previous mouse. The Cube is a ‘One more thing’ so skip to the end (1:21:46) if that’s what you want to see:

The one that started it all; the original Macintosh introduction. This is just a five-minute outtake but it’s still a classic:

This is the iPhone 4S introduction. The event itself isn’t that noteworthy, except for the introduction of Siri, until you realize it took place on October 4th 2011. The next day, on October 5th Steve Jobs died.

The team presenting here, all close to Steve, knew he was on his deathbed and almost cancelled this event. Watching again with this knowledge makes it a poignant point in Apple’s history.

The most recent keynote at the time of writing was at WWDC 2014 and it was smooth show. It felt like the first event since Steve Jobs died that everybody felt really comfortable on stage and eager to show the world what they were working on:

Steve Jobs was famous for his ‘One more thing…’ moments so here’s a ‘one more video’ page. Seemingly at the end of his presentation, he would suddenly throw in a ‘oh, one more thing!’ and then announce a new and amazing device or product. Here’s a compilation of a bunch of them:

If you want to watch even more Apple Keynotes check the unofficial AppleKeynotes Channel on Youtube or Apple’s own YouTube channel which also includes all their commercials. And do join us for live coverage of the keynote on September 9!

Don’t miss: The iWatch won’t be what you expect it to be…

Read next: Sumry's new one-page PDFs let you see when your résumé was opened by a recruiter