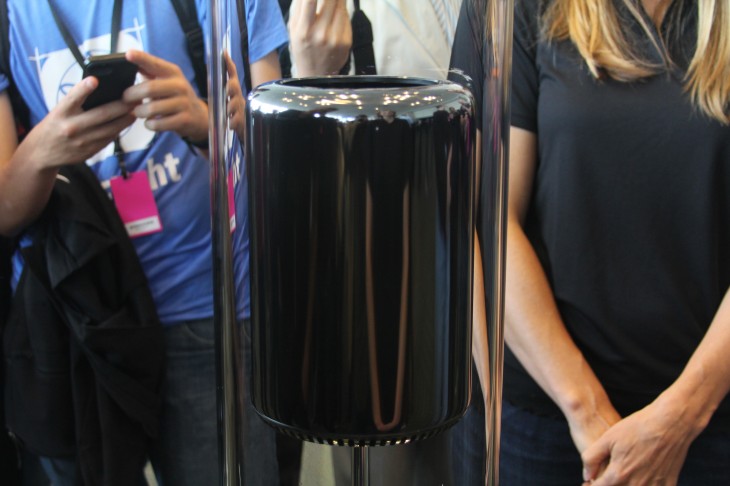 Today at its WWDC event in San Francisco Apple previewed a refresh of its Mac Pro line of desktop computers. The shape of the device is a cylinder. Apple went on to mock its doubters, saying “can’t innovate any more my ass.” Well put, Apple.

Update: Get a better view of the new Mac Pro.

The new models will support up to a 12 core Xeon processor from Intel. Its DDR RAM will run up to 1866MHz. It’s Flash storage will read at a rate of 1.25 GPBs. It is, Apple claims, 10 times faster than any older Mac Pro drive. The computer will come with dual workstation GPUs, a first for an Apple.

The new Mac Pro will support up to four 4K displays at once. All external expansion is supported via 20 GBps Thunderbolt 2. All that is placed inside of a far smaller space. It takes up just 1/8th of the space of the old Mac Pro.

Speculation ran hot concerning the new Mac Pro machines, with TNW’s own Matthew Panzarino penning a lengthy editorial discussing the possibility of Apple building a  new processor for the line. If you are into desktop machines, it’s required reading.

The New Mac Pro is assembled in the United States, and will come later this year.

Read next: Apple announces over 600m iOS devices sold to date, with over 90% of users on the latest version