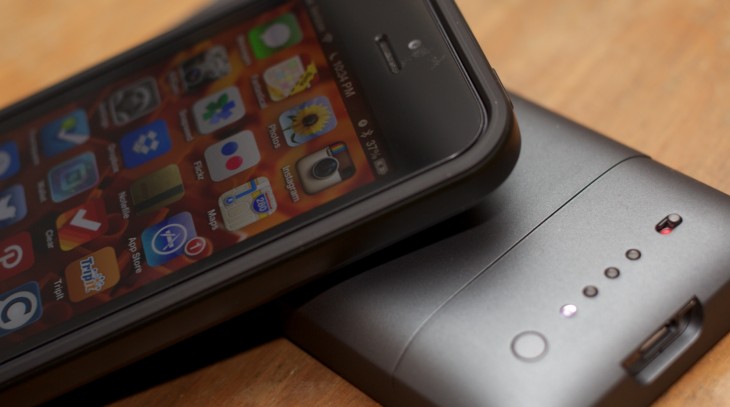 The iPhone has a flaw, and it’s not a minor one. In fact, it affects every single one of the over 100 million sold so far, and there is no real solution yet in sight.

Before you bust out your benchmarks or anecdotes, yes, I know exactly how it compares to other phones on the market. But the batteries in those other phones suck too.

They’re not great, they’re not even really all that good. They’re adequate. They get us through the bulk of a work or travel day, for sure, but they do so in a way that is subconsciously crippling the capabilities of not only the hardware bits inside but also the software that you use.

Do you know why Apple doesn’t do ‘full on’ multitasking? Why it is so incredibly strict about how apps suspend themselves in the background and exactly what location services they use and for how long? Do you know why they reject apps that waste CPU cycles? Why lightning fast push and pull email is still smoke and mirrors for the most part?

I’ll save you the conjecture. It’s the battery. The battery in the iPhone is so wretched, in fact, that millions of dollars were spent developing incredibly low-power LTE chips in order to make it feasible to include the faster wireless technology in the iPhone 5 at all.

As I mentioned before, all smartphones suffer from similar battery issues and even ones that feature extended (fat) batteries are still well below where they need to be.

Almost every phone on the market uses a lithium-ion polymer battery at the moment. That refers to the type of chemistry used to store and disperse energy to your devices. The problem is that lithium-ion batteries are nearing their theoretical limits for storing power. Research is being done to see if we understand the chemical interactions going on as well as we think we do, but for the most part, we’re getting just about as much out of this tech as we can ever expect to.

At this point, phone makers have been cheating battery limits for a while.

And Apple has been ‘cheating’ at battery tech better than anyone for years. The iPhone 5’s battery life is incredibly similar to the iPhone 4S and the iPhone 4 before it and even the iPhone 3GS. That’s great, but remember that each model has been significantly more powerful and therefore uses far more juice than the one before.

It’s managed to do this in a bunch of different ways, depending on the device. For its MacBook laptops, it was largely a journey of physical optimization. The batteries used to look something like this:

Big hard hunks of plastic, some of them easily removable, almost always in one big lump. Then, Apple moved to a segmented battery that could be chopped up and tucked away throughout the casing:

This made it easier to fit a bunch more battery volume into a computer, but pissed people off who hated that they weren’t user replaceable. It also made laptops thinner, but that’s another thing. With the iPad, the battery is now just a sack that has no mounting screws or hardware, they literally glue it in (image courtesy iFixit’s teardown):

This kind of stinks for repairability, but it means that the iPad gets fantastic battery life. It’s the one thing that (almost) no one complains about with the iPad, and a lot of it is due to the kind of ‘cheating’ that Apple has been perfecting.

Then there’s the iPhone. The iPhone 5’s battery looks like this (also courtesy iFixit):

As you can see, this is kind of where the cheating stops. There’s really no more room there, and Apple’s phones are getting thinner, not thicker. So, for the iPhone 5, Apple found a  new way to cheat. Actually, it was a cheat first used commercially by Motorola: it upped the voltage from 3.7 to 3.8v.

Motorola has been shipping Lithium batteries with an alternative high-voltage chemistry in its devices for some time. A bump of just .1v contributed significantly to the iPhone 5’s power reserves. In addition, it uses a custom processor which is more power savvy — the first of its kind to be designed from the ground up by Apple. And its LTE chip is also known to be one of the most power-lean in the world.

So, what did all of those years of sweat and blood get us? You can see by Anandtech’s chart (WiFi is a more accurate gauge because LTE is so quick at running benchmarks) that it got us about an hour more of browsing life. That’s it.

And that’s controlled browsing. In overall tests, it actually performs only slightly better or about the same as the iPhone 4S. That being said. There is definitely an argument to be made that this is incredible work by Apple. Getting parity or better in a newer, more powerful device that’s also thinner and lighter is pretty crazy.

But it’s not good enough.

The problem with battery life

Here’s the problem with battery life in the iPhone: it’s subconsciously crippling the way that you use apps, the web and everything else you do on it.

Whether you realize it or not, everything you do on your iPhone is subtly affected by your awareness of your battery level. You choose to shut the screen off rather than look at album art while a song plays. You turn your screen brightness up and down, you toggle Bluetooth on and off like a maniac. You don’t use those location apps because they might eat up some battery running in the background. You get nervous near the end of the day and stop taking as many pictures as you might. You stop posting to social networks. You keep the screen off in your pocket. You toggle off all network traffic. It’s dead.

And that’s just users. As I mentioned before, the apps themselves are severely limited in what they can do. Developers could do so many cool things running apps in the background or leveraging the iPhone’s powerful sensors and location services more aggressively. But the limits placed on them are preventing them from doing so.

Why am I picking on the poor iPhone?

After all, it’s just one phone among many, and it has a pretty great track record in comparative battery life. If I’m going to  choose a phone to complain about it should be Windows Phone phone X or Android phone Y, right? Here’s why the iPhone:

Simply put, Apple is the company to watch when it comes to true battery life advancement. It could be invented by one of the major battery concerns like LG Chem, Samsung or Sony, but it will probably end up in the iPhone first.

The Mophie Juice Pack is a fixture at tech conferences and conventions. If there’s a set of journalists on site, there are also a raft of the battery accessory company’s external battery packs for the iPhone floating along with them. I’ve long been a fan and have generally purchased one for trips and such with every generation of iPhone.

Just this month, Mophie released the latest versions of its Juice Pack battery cases, the Helium and Air for iPhone 5. The Helium is thinner and lighter, but slightly lower capacity, and the Juice Pack Air is heavier and slightly longer, but beefier and better constructed. They are not expensive: $70 for the Helium, which adds roughly 80% charge to your iPhone and $100 for the Air, which gives you a 100% boost.

Using the Mophie cases on an iPhone is an indescribably liberating experience. There are a couple of quirks, like the fact that there is no Lightning connector passthrough (they charge via Micro USB, and don’t sync) and a recessed headphone jack which doesn’t allow third-party control use (adapter provided). But the power, oh the power. Having an extra 80-100% of battery on the iPhone is a nearly carnal delight.

You use apps with abandon. You toggle on every networking option, open Rdio and check out the artwork as the music streams over the web, you leave it running in the background as you fire up your GPS app and get walking directions. You turn on the alerts that let you know when you’re near your favorite spot. Basically, everything you were promised you could do with your phone, all at once. It’s gluttonous, sure, but it also provides a real feeling of battery independence and joy in what a computer like the iPhone makes you capable of.

My time with the Mophie Juice Packs, and other battery packs like them, has led me to a simple conclusion. We don’t need the iPhone’s battery to be 10% better, or 20% better. We need it to be 100% better.

The battery technology in the iPhone needs an aggressive leap forward in order to deliver on the promises of the apps we’re using today, and to unlock potential for tomorrow.

The only question now is how? Sure, Apple may find a way to pull another ‘cheat’. Further mold its batteries around the internal components, essentially injecting the battery into the casing, thereby eke-ing out some further advancements. But a true leap in battery capacity is going to take a radical new technology.

Currently, Lithium Air and Lithium Sulfur batteries are being focused on as options by the ‘big battery’ crowd. Mostly for automotive applications though, and prototypes are only now beginning to be manufactured. To be blunt, these are ‘far future’ solutions. Unfortunately, our problem isn’t far in the future, it’s right now.

Everything I’ve seen or heard indicates that this year’s iPhone will be a nice upgrade, but will likely not feature any breakthrough battery technology. Indeed, because of the state of battery research, it’s unlikely that it even could. But the iPhone 6, perhaps the iPhone 7? Maybe.

The next major upgrade of the iPhone sounds too close even to take advantage of a radical new battery composition, but Apple has delivered the future early before. And the time is ripe for it to do it again, so that we can finally use the iPhone, and eventually all smartphones, the way they were meant to be.

Note: As there seems to be some confusion, I definitely don’t believe that external battery packs are a solution, they’re actually a result of the problem, which is battery life. They just demonstrate how much battery life affects user experience. Batteries are very difficult, and Apple does better than most. But it still needs to do better, as batteries are the biggest issue roadblocking consumer technology.

Read next: Dublin Web Summit's Paddy Cosgrave on missed opportunities and the benefits of small meetups