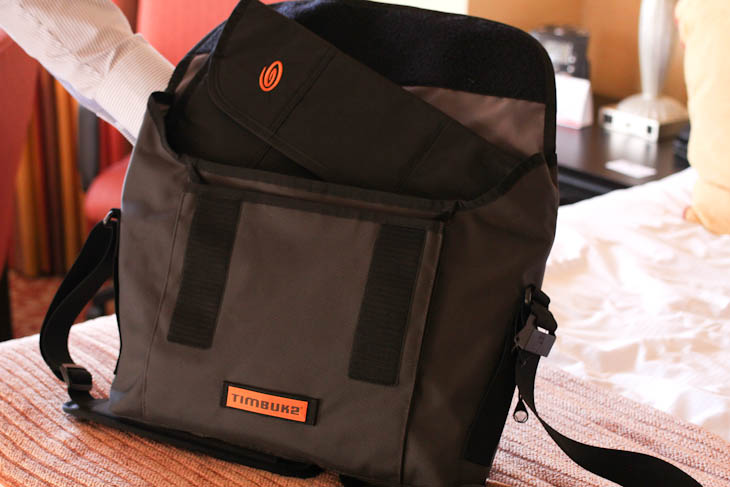 In 1989, when bike messenger Rob Honeycutt couldn’t find the perfect bag, he decided to make one. Then he started using scraps of fabric to sew versions for his friends. Since then, Timbuk2 hasn’t stopped making the classic San Francisco messenger bag, though it has expanded the lineup significantly.

Now, more than a decade after it introduced its first online customization system for bags, Timbuk2 has a shiny new HTML5 version. This comes just as it’s about to launch three exclusive offerings in Apple Stores in the US.

I spoke to Timbuk2 CEO Mike Wallenfels at CES about how the product line and the company’s manufacturing processes have changed over time. One shift that they’ve seen is that some 18% of their ordering is coming in on the iPad. That figure has prompted the new customization tool, as it’s likely that this number could be much higher.

The local factory in San Francisco manufactures some 70k customized bags, though there are many other lines that are manufactured overseas. The customized bag business accounts for 20% of Timbuk2’s sales. Interestingly, the bags have a very strong international pull, with Singapore clocking in as the largest per-capita country for orders.

To keep on top of the trends, Wallenfels says, they use a combination of Stylesight and market visits to figure out shifts in tastes and materials. New fabrics and technologies are a part of that, but also patterns, colors and shapes.

Large reflective panels, for instance, were very big, then bright patterns and now clean, stylish, dark bags with hits of bold colors. There’s always a hint of San Francisco about the designs though, an influence that Wallenfels says is no accident. “Our employees have lots of family members tied to the tech culture and companies [here],” he says.

At the show, there were several new bags on display, some of which we’ll be reviewing later. In addition, however, there are three new bags being produced exclusively for sale in Apple Stores. The bags were hand-picked by and hand-made specifically for the team that runs the store buying team.

This is part of an ongoing program whereby Apple reaches out to manufacturers that they feel match up with the company aesthetic to make products bespoke for sale in their retail locations. We’ve come across mention of this program before among bag and accessory manufacturers. Always forward-thinking, always stylish and always made to fit Apple products perfectly. Last year (and most likely this year) we hear that a team came to CES to hand-pick stuff for the program (as well as for employee gifts).

This gives Apple the ability to offer bags that it knows are high-quality, but that also drive sales because they don’t look like anything else out there. You’re getting a bag made specifically for Apple’s stores and its products, in a unique configuration. It’s not an unheard of strategy, many stores have model exclusives, but the level of attention that Apple pays to making sure that it’s going to be offering a unique and precisely right accessory is anything but common.

The three new exclusives include the Finder, a bag made to hold an iPad (up to full size) and a 13″ MacBook. The bag comes with a clever removable sleeve that allows you to draw the items out to carry around like a portfolio or to pass through a security checkpoint. The model we saw was a pleasing dark charcoal with slashes of orange at the logo and zippers. The interior had padding and soft lining in all the right places to protect your stuff. This will run you $79.

The next is the Launchpad, a more business-oriented option with a more muted palette that holds up to a 15-inch laptop. There’s more structure here, which allows it to stand on its own more easily, and there are panels of a suitably dressy leather-like material (but not leather, as this is wipeable). It’s going to run $99.

The third is the Slide backpack, a sleek job with few exterior protrusions. The Slide features a wraparound zipper that lets you swing the pack around on one shoulder to access your laptop or iPad from the side. There’s also a fully lined ‘iPhone 5’ sized pocket on the corner for quick access.

All three of the bags will be available in 240 Apple Stores in the US in January.

Read next: Google begins allowing all developers to respond to user comments and reviews on Google Play