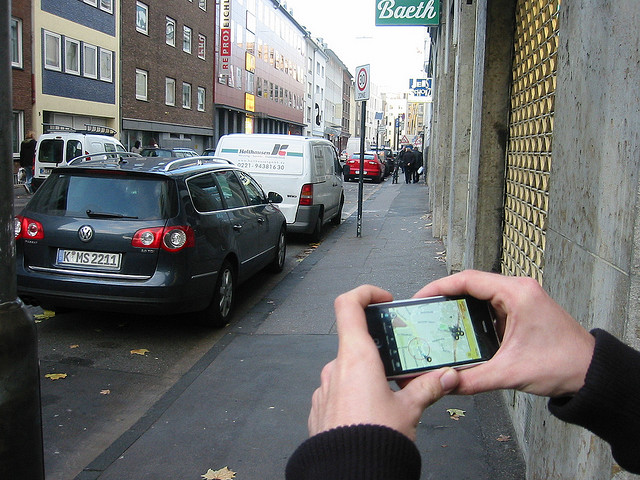 Apple has long been rumoured to be developing its own 3D mapping service but we haven’t had much to go on as to how it would look or operate. Today, BGR posted shots of what it believes is the new iOS Maps app, sharing a composite image of various elements believed to be included in the new application.

The image looks fake, because it is. It has been mocked-up by the team at BGR to give you an overall look of the app from a number of partially blurry and obscured photos of the real app in use (which can be found in a gallery, here).

The app features a refreshed user interface including a brand new navigation bar. This bar, we’re told, is silver instead of blue. Since the current Maps app follows the standard blue iOS color scheme, we think it’s possible Apple might shift toward a silver color theme in iOS 6 like on the iPad.

The iPhone version of Maps has a floating locate me button (it sounds very similar to Android’s Google Maps app) in the bottom left corner. To access 3D mode, which will make use of Apple’s C3 Technologies acquisition, you have to peel back the lower right corner of Maps just like the current version and enable 3D mode. Once enabled, you can switch in and out of 3D mode by tapping a 3D icon in the lower left corner.

It’s worth noting that the above shot shows the 3D mode of Apple’s new maps, we expect that the company would also provide detailed 2D top-down views too.

It’s a pretty safe bet that Apple will detail its new Maps app and mapping service at its upcoming WWDC 2012 conference, which is set to commence on June 11-15. The company pushed live the conference schedule and official WWDC 2012 app earlier today, confirming its keynote which is due to start at 10am PDT on Monday 11 June.