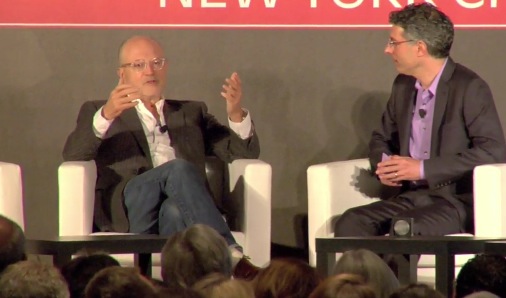 Fast Company has an interesting piece up based on an on-stage interview with Mickey Drexler, the CEO of J. Crew and Apple board member. In the piece, Drexler makes an interesting statement that can be construed to confirm Apple is looking to the living room for its next conquest.

“You know, Apple has 10 products,” Drexler said. “The living room they’re dealing with at some point in the near future.”

Two major possibilities come to mind here. Either Drexler is talking about a software initiative that it will bring to iPhones and iPads, more tightly integrating the Apple TV software experience, or he’s talking about a full-on standalone television. Either way, it’s mildly exciting.

Oh, and Drexler also says something about Steve Jobs wanting to design an ‘iCar’ before he died, which I don’t doubt. I think Jobs wanted to fix everything he saw as crap. He was even redesigning his medical monitoring systems while in the hospital for cancer.

But an Apple board member saying something about Apple’s plans in the living room, that’s interesting.

Read next: 30 of The Best Alternatives to Helvetica