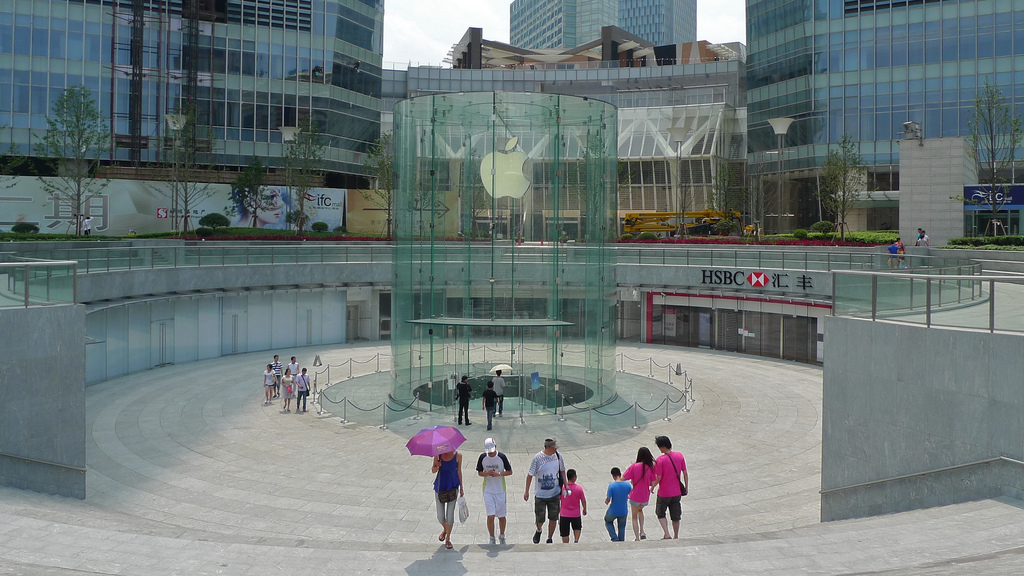 Apple has filed a patent application for the curved glass panels used in its store in Pudong, Shanghai, one of five stores in China. Apple is known for its glass façades and glass staircases—for which it received a design patent back in 2002, famously listing founder Steve Jobs among its inventors.

The panels are designed to be fastened together, to form part of a larger structure.

A building panel and a building formed therefrom, where the building includes a plurality of building panels arranged to form a cylindrical shape, where each panel comprises a single, or monolithic, glass piece.

The cube’s larger glass panes were made by Seele GbmH & Co., a German glass manufacturer that is Apple’s preferred partner as it is one of only two in the world that have been able to produce glass that stands up to the rigorous demands of Apple’s architects, like Bohlin Cywinski Jackson, who designed the 5th Ave. cube.

Bohlin Cywinski Jackson employee David Andreini is named as the primary inventor on the application, along with James O’Callaghan, the structural engineer responsible for the glass staircases.

For the Pudong store, Beijing-based North Glass Safety Glass Co., produced the panes for the equally impressive entrance. These panes are 41 ft long, 8 1/2 feet wide and they’re curved to boot.

This is an image of the panes installed as the entrance to the store. Apple has previously filed an application for the entire building’s design, which features a large underground portion and one of those classic staircases.

Read next: With Uppsite you can turn your site into a multi-platform app within minutes