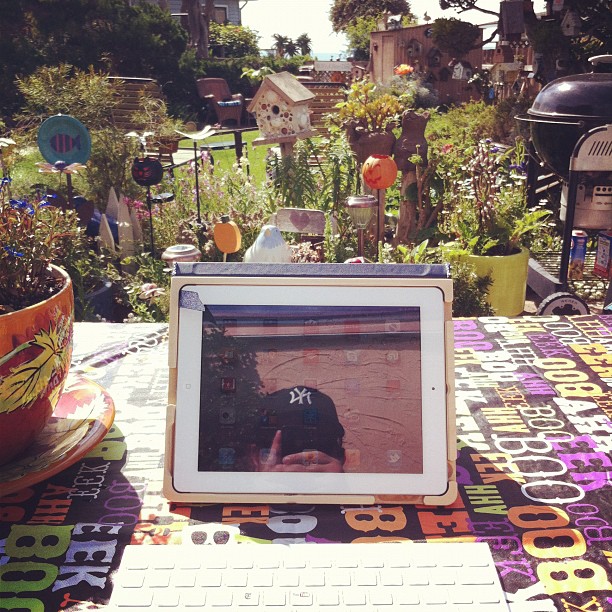 Yesterday, some new numbers were released by analytics firm Canalys which placed Apple in the top position of all PC manufacturers worldwide. This move in position was largely due to the 15 million iPads Apple sold in Q4 of 2011.

These numbers have sparked some talk from those defending traditional manufacturers like HP, and Lenovo who were leapfrogged by Apple in the Canalys report. In a post at Barron’s, Tiernan Ray goes out of his way to compare the numbers delivered in the report with an earlier one from Gartner which lists only non-tablet sales.

Ray went to Canalys for more information about how the numbers broke down, which is great, but makes it a point to emphasize that the grouping of tablets and ‘regular’ PCs is controversial. Note his bolding in the paragraph, the only word in the article other than the name of a company that is highlighted in this way:

In a phone conversation this afternoon, Canalys’s principal analyst for mobile devices, Chris Jones, acknowledged that grouping desktops and laptops with tablets and other devices is controversial.

Chris Jones from Canalys makes a concise and simple case why the reporting of tablets as PCs as one number is now its standard:

“We do see it as one big market of mobile computing. These tablets are not just about consumption any more, people can do much more with them than when they first appeared. The application breadth has increased and they are being used more and more as business tools.”

Canalys feels that tablets are used for the same purposes as PCs, are viewed in a similar fashion by those looking to purchase a PC for the home and should be counted among them.

Ray’s feelings that tablets should somehow be segregated from the PC market at large are echoed by John Mello at PCWorld, in an article that uses quotation marks pointedly to drive this home. In the title it questions whether Apple actually passed HP in “PC” sales and notes that most of the “PCs” sold by Apple are actually iPads, implying that the numbers were therefore suspect.

He then goes on to make the disingenuous statement that Apple would have lost market share if not for iPads:

But even Apple would have seen a decline in market share of 0.4 percent if tablets were removed from its shipment numbers.

This is actually more than misleading, it’s wrong. The Canalys report actually states that “excluding pads, the client PC market declined 0.4%” (Italics mine). The entire market would have suffered for the exclusion of tablets, not just Apple. In fact, Apple actually sold 5.19M Macs during its last quarter, bringing sales up 26% when compared to the 4.13M it sold in the same quarter a year ago.

That means that Apple, even without iPads has gone up .02% in overall market share, not down 0.4%. That the rest of the market is depressed only emphasizes how much growth there was from the inclusion of tablets.

In the end though, the fact that Mello reads the report incorrectly is second to the fact that the generalizations about tablets not being PCs needs to end. Mello goes on to quote two incredibly silly methods for determining whether a computing device is a ‘PC’.

The first point is so silly as to be parody, especially as Mello just spent three paragraphs before this explaining why Ultrabooks, many of which have keyboard smaller than a ‘standard size’ would save the PC market. Not to mention the fact that almost no Netbooks have a full-sized keyboard and that HP itself sells many models of PC with touch screens that can be used with software keyboards.

The second point is an oft-quoted differentiator between a PC and a tablet. Mello quotes PC World’s Eric Grevstad as saying that “People are using tablets for e-reading, Web surfing, and movie viewing…if you focus on real-world usage patterns–I say Canalys is wrong to count tablets as PCs.”

This viewpoint is incredibly narrow and ignores the large array of people that rarely, if ever, use their PCs for anything beyond surfing the web and watching YouTube videos. But aside from that, the fact that a recent Neilsen report placed productivity apps right behind games and entertainment as the ones that people paid for the most on portable devices is also telling.

Among app developers, it’s widely known that productivity apps are a great seller and that you can even charge more for these than others that are more popular like games. The trend is clear, people are using the iPad to get things done.

One of those people is me. If you’ve read our review of iOS 5 here on TNW, you’ll know that it’s pretty long, over 15,000 words actually. It was written almost entirely on an iPad in Markdown using a text editor called Elements.

It wasn’t done as an exercise either, I wrote much of the review at the beach using the iPad in the place of my laptop so I didn’t have to expose the ‘full-size keyboard’ to the sand and wind. Then, when I was sitting on the patio, I popped out a keyboard and plugged away. With or without, it still worked.

And I’m not the only one, creators like Federico Viticci of Macstories writes his personal blog largely from the iPad, Shawn Blanc and Harry McCracken of Technologizer are both using the iPad to make things. McCracken even recently named the iPad his favorite computer after adapting his workflow to the tablet.

In fact, with its intimate touch interface and expandable input options, the iPad could easily be considered the most personal computer ever created.

People are using tablets to create now, and it’s just the beginning. The battle for tablet supremacy is being won by Apple right now, but the war isn’t even close to being over. There will come a day when mobile PCs like laptops will blend thoroughly and people will simply make a choice based on the form factor, rather than whether or not they ‘use them to create’.

In fact, it’s likely closer than you would think, consumers, including small businesses are already choosing tablets as their next PC purchase. You can’t put the tablet genie back in the bottle, keeping it safely ensconced in its own category. Tablets are PCs, get over it.

Read next: This site mocks 37 Signals after it attacked a YC startup for stealing code