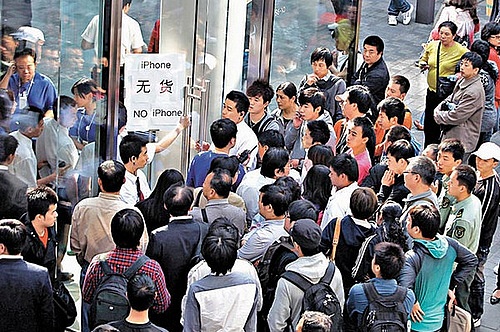 Apple has announced that it will halt the sale of the newly launched iPhone 4S in China after reports of pandemonium at some locations due to high demand, reports Reuters.

An Apple spokesperson said that they were “unable to open our store at Sanlitun due to the large crowd,” adding, “to ensure the safety of our customers and our employees, iPhones will not be available in our retails stores in Beijing and Shanghai for the time being.”

The halt is likely due to problems faced when chaos erupted at the Sanitlun store in Beijing. Large crowds, including huge numbers of scalpers, had gathered at the store previous to the device’s release. When it was announced that the store would be closed, shoppers pelted the location with eggs.

“The demand for iPhone 4S has been incredible and our stores in China have already sold out,” said Apple’s representative.

Read next: Yes, Apple employees were at CES, and some were there to buy