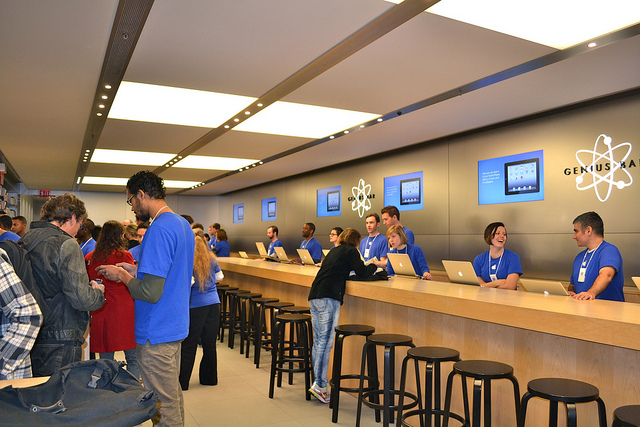 Apple’s policy of not becoming involved in the theft of their products from customers may be costing the company in the number of replacement models it hands out, a report from The Toronto Star reveals.

Toronto-based Scott Barkley found that whilst he was drinking at a local bar in the city, his coat which contained his car keys, wallet and iPhone was stolen. Finding his coat in a nearby alley but his wallet, keys and iPhone 4S long gone, Barkley filed a police report, cancelling his cards, mobile service and other personal accounts.

At 1pm the following day, Barkley had a bit of luck; the thief, in his pursuit to unlock the now unusable phone, had taken the device to a local Apple Store and had booked an appointment with an Apple Genius. With the iPhone registered to Barkley, it was he who received the email notification for the appointment.

[Barkley] called the store to tell them that the person who showed up for that appointment would probably be carrying his stolen phone.

Perhaps, Barkley asked the clerk on the phone, Apple might want to notify mall security? Barkley was told it is Apple policy not to get involved in such matters.

Apple’s decision not to intervene is expected, after all the company will see a number of customers attempting to fix or replace stolen iPhones and other Apple devices. The company would likely leave it to the police to apprehend the individual involved, ensuring customers contact the authorities and not their local Apple Store should their Apple product be stolen.

However, when the thief did arrive at the store, he walked out with a brand new (unlocked) iPhone, no questions asked:

Detectives called Barkley to tell him he could pick up his phone at the police station. It turns out someone did come in with the phone – before Barkley and the police arrived – with a story about buying it from a friend of Barkley’s uncle, only to find the phone didn’t work. In fact, it wasn’t working because Barkley had had the service disconnected.

The Apple clerk at the Genius Bar assumed it was a phone malfunction, and seemingly without checking to make sure, handed the man a brand new phone and put Barkley’s stolen phone in the back, to be sent off for servicing.

Police intercepted the device after it was taken by Apple and prepared for servicing, returning it to its owner. Of course, Apple had aldo issued a replacement handset to the individual that stole it — leaving Apple hundreds of dollars down.

Barkley, speaking about the detectives that returned his phone:

“I think it amused them to do something nice, to get someone’s phone back. I think they were amazed by the whole disinterest.

The thief got their phone, I got mine and because of their own indifference, Apple is out a $500 phone.”

Apple could well absorb the cost of the stolen device and we are sure it would have locked the device as soon as it emerged that it was given to a criminal.

Apple’s process is also one that reduces the need for any of its employees to confront criminals. By giving out a new device, which may also be refurbished, the iPhone can be activated and the user’s details then logged, leaving the Police to follow up and apprehend the thief.

It might be an expensive process but we imagine Apple cares more for its staff than its iPhone stock.

Some will argue that Apple should flat-out refuse helping a criminal, others will sympathise with the company’s desire not to put its staff in danger. Where do you sit?