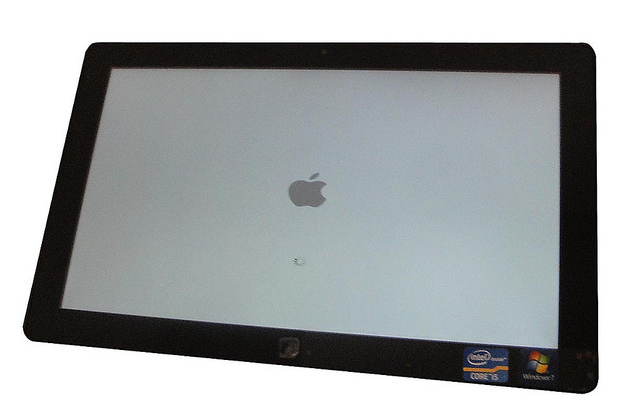 There is probably no world in which this will be practical, but the nerd in me loves to see people make Apple software run on weird hardware. That’s why this project to get OS X 10.7.2 running on the Samsung Series 7 tablet gets me so giddy.

Yes, OS X on a tablet is incredibly impractical, that’s why Apple created iOS after all, but it’s still a pretty neat feat to pull off. TonyMacx86 forum member Mad Audi Scientist is chugging away at massaging the latest version of OS X onto the Windows 8 developer tablet and he’s managed to get some initial progress documented.

So far he’s booting OS X from a USB Key and, due to an issue with the graphics chip in the tablet, is running it on an external display with a Bluetooth keyboard and Apple Trackpad. The touchscreen still works and there is minimal audio support, although many other components, like WiFi are still a no go.

He says that he isn’t giving up though and has posted a rundown of what he has so far and says that he is reaching out for help to get it going fully on the tablet. The Samsung Series 7 is notable for its specifications, which many have noticed are incredibly similar to the MacBook Air.

So we may get that ‘full OS X’ tablet that we always (never?) wanted, ironically running on Microsoft’s reference hardware.