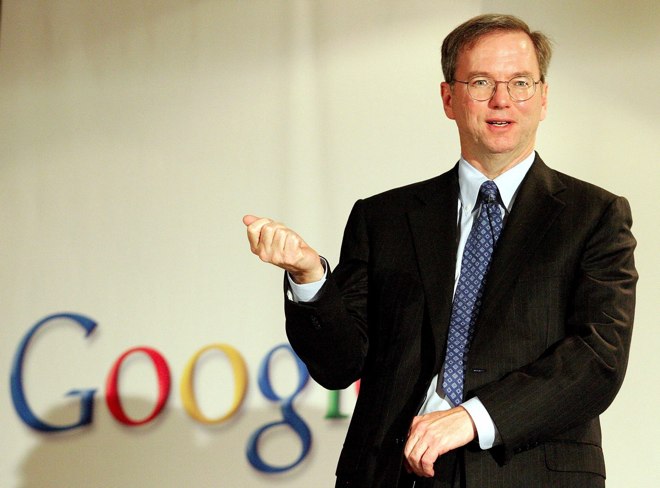 Google’s Chairman Eric Schmidt visited South Korea today and while he was there he was asked to comment on statements by Apple’s Steve Jobs that accused Android of being stolen from Apple. Schmidt managed to dodge the question by using the timelines of the projects, reports John Paczkowski of All Things D.

So the dance here comes down to one of timelines versus design ‘inspiration’.

Jobs’ statements came from his biography, but Walter Isaacson. In the book, Jobs was quoted in the wake of HTC’s introduction, in January 2010, of an Android phone with multitouch and similar features to the iPhone.

Jobs likened Google’s actions to “grand theft” and said, “I will spend my last dying breath if I need to, and I will spend every penny of Apple’s $40 billion in the bank, to right this wrong. I’m going to destroy Android, because it’s a stolen product. I’m willing to go thermonuclear war on this.”

“I’ve decided not to comment on what’s been written on a book after his death,” Schmidt told a Reuters reporter. “Steve is a fantastic human being and someone who I miss very dearly. As a general comment, I think most people would agree that Google is a great innovator and I would also point out that the Android effort started before the iPhone effort.”

Dismissing Jobs accusations, he said that “”the Android effort started before the iPhone effort.”

Depending on what you take ‘effort’ to mean, this is true. The company Android was found by ex-members of Danger, the design house behind the popular SideKick phones widely adopted by T-Mobile. Google acquired Android, the company and the project, in 2005.

By the account in Isaacson’s book, the genesis of the iPhone as a serious project was some time in late 2005. Jobs had seen articles in Wired and other magazines lambasting the Motorola ROKR for being a terrible product. He told Tony Fadell, the ‘father of the iPod’ and others at one of the iPod product meetings that he was “sick of dealing with these stupid companies like Motorola,” and said, “let’s do it ourselves.” (Isaacson, 465)

At the time, a second project was going on at Apple that would eventually become the iPad. It was focused on using a multitouch interface for control, something that would become a signature difference between the iPhone and its rivals, and for which Apple was granted many patents.

The question, though, is really more about the features of Android, not the fact that it existed.

As late as December of 2007, Android phones still looked much like any other ‘keyboard and screen’ device that had come before. Brian Lam of Gizmodo published a photograph of a device running Android, and Joshua Topolsky of Engadget posted a tour of the OS. Neither of these looked much like the Android of just a year later.

When the HTC Dream was introduced (sans multitouch) in 2008, it had transformed itself into a mirror-world version of the iPhone. By 2010, Android phones had incorporated multitouch technology and other features popularized in the phone market by Apple, sparking Jobs’ ire.

So the tale of the tape when it comes to timelines certainly puts Android as ‘first on the scene’. But the question here isn’t one of firsts, its a matter of whether Android did or did not lift most of its design pivot, along with its input method, from the iPhone.

That’s the issue that Jobs was willing to go to the mat with Google over. And, at least up until this point, it appears as if Apple was toeing that line in its various litigations with Android device manufacturers, with little hope for settlement.

As Jobs put it to Schmidt, he wasn’t interested in settling or licensing. “I don’t want your money. If you offer me $5 billion, I won’t want it. I’ve got plenty of money. I want you to stop using our ideas in Android, that’s all I want.”