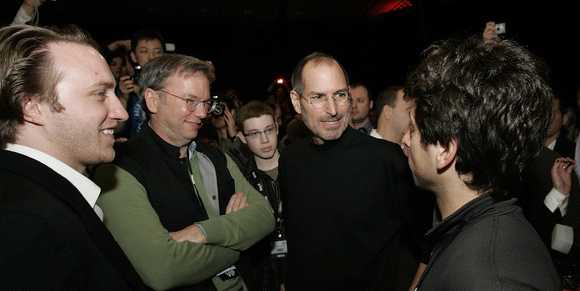 In a remarkable interview on Bloomberg TV, Google Chairman Eric Schmidt shared a moving appreciation of his friend and competitor Steve Jobs, declaring him the “Greatest Tech Entrepreneur in history.”

In the lengthy interview, Schmidt made clear he had the utmost respect for Jobs as a leader, entrepreneur and man.

Between the countless superlatives, Schmidt made clear that Jobs was seriously ill and it was his stubbornness and devotion to his life & work that kept him alive. In Schmidt’s own words “he lived the longest he possibly could with someone with his illness…. If there was anyone who understood the value of life, it’s Steve Jobs”

Schmidt went on to describe Jobs as “our country’s greatest innovator. He cared the way an artist cares about every brush stroke.”

When asked “Is there anyone like him that you know? Schmidt replied, “I do not.”

He continued, “Gifts that Steve has given us will continue for many years.”

Read next: These photos will make you smile: Steve Jobs testing Photobooth